Energy Crews to Leave Puerto Rico as Funding Dries Up

A $750 million federal contract is running out of money, despite nearly a quarter of a million people remaining in the dark. 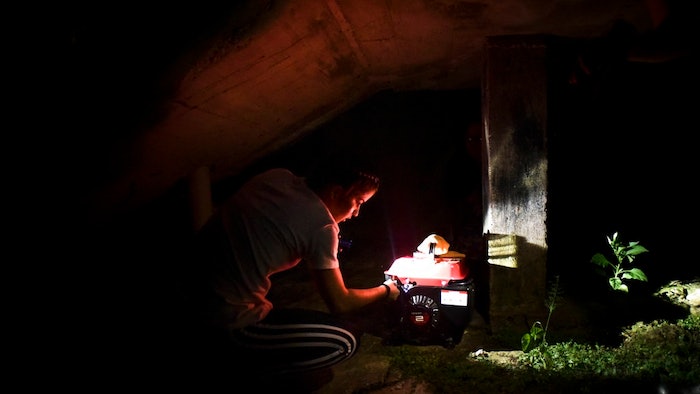 SAN JUAN, Puerto Rico (AP) — Crews who are helping restore power in Puerto Rico as part of a $750 million federal contract will leave the U.S. territory soon as nearly a quarter of a million customers remain in the dark more than five months after Hurricane Maria, officials said Wednesday.

Brian Mershon, a spokesman for Texas-based Fluor Corporation, told The Associated Press the contract with the U.S. Army Corps of Engineers is ending in part because no further funding is available. He said that after Feb. 25, some 1,600 workers and 1,300 pieces of equipment will remain in Puerto Rico, compared with a peak of 3,000 workers and 2,000 pieces of equipment.

"Crews who will remain in the U.S. territory for upcoming weeks will continue to restore power and complete assignments based on available funding and materials," he said. "This is a normal part of the life cycle of large government projects."

Fluor recently said it has helped restore power to more than 230,000 customers.

Preston Chasteen, a spokesman for the Corps of Engineers, told the AP that the agency and all its contractors still have a total of more than 3,600 workers in Puerto Rico to help restore power after the hurricane hit on Sept. 20. The Category 4 storm damaged two-thirds of the island's power distribution system and caused the longest blackout in U.S. history.

"As part of a natural progression of any emergency response, some contractors are beginning to responsibly draw down their workforce but have provided plans that allow them to complete as many assigned lines as possible," he said. "The primary limiting factor to our progress has always been the delivery of materials (poles, wire, and transformers), which is improving daily. The number of workers has not been a limiting factor."

Chasteen said the agency aims to have between 90 to 95 percent of customers with power by the end of March, but some Puerto Ricans worry they will remain in the dark when the Atlantic hurricane season starts on June 1.

Anger has spread across Puerto Rico as 15 percent of power customers remain without lights and more than 420 intersections without stoplights. Dozens of communities have organized protests, while others have taken upon themselves to do some of the initial work, including digging holes and installing wooden poles.

The power restoration efforts also come as Puerto Rico's Electric Power Authority seeks million-dollar loans to remain afloat. A federal judge approved a $300 million loan on Monday, but a federal control board overseeing the island's finances says that will only help keep the company operational until late March.

Gov. Ricardo Rossello announced in January that he plans to privatize the power company, which is $9 billion in debt and operating with infrastructure nearly three times older than the industry average.