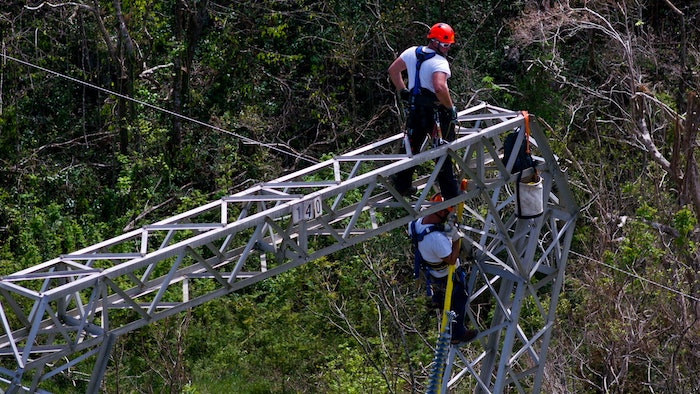 SAN JUAN, Puerto Rico (AP) — Officials in the U.S. and Puerto Rico gave differing views Thursday on when power will be fully restored to the U.S. territory after Hurricane Maria hit as a Category 4 storm more than a month ago.

"We are focused on executing the mission we've been assigned," Alexander said at a hearing in Washington, adding that the agency has been working with the U.S. Department of Energy to help develop a more resilient electrical grid for Puerto Rico.

Gov. Ricardo Rossello criticized the Army Corps of Engineers earlier this week for what he said was a lack of urgency in responding to Puerto Rico's island-wide blackout.

The discrepancy came as President Donald Trump cleared the way for additional federal funding for Puerto Rico by amending a September disaster declaration to increase the share of rebuilding and recovery costs borne by the U.S. government.

Trump had already authorized the Federal Emergency Management Agency to pay 100 percent of some cleanup and emergency costs for 180 days. Washington will now pay 90 percent of the additional cost of rebuilding Puerto Rico, including repair of public infrastructure like hospitals, bridges and roads and restoration of the island's devastated power grid.

Typically, U.S. states cover 25 percent of those costs, with federal taxpayers covering 75 percent. Puerto Rico's finances were in shambles even before the storm made landfall in September.

A large swath of the island still has no electricity, and complaints are widespread among business owners who say losses are mounting and from parents who say their children need to start school. Nearly 20 percent of the island remains without water since Maria hit Sept. 20 with winds of up to 154 mph, killing at least 55 people. Tens of thousands have lost their jobs and some say more than 470,000 people could leave the island in upcoming years.

"If we don't re-establish power and other basic services, the damage to our economy will be even greater," said Puerto Rico's public affairs secretary, Ramon Rosario. "We cannot allow that, and we have established clear goals."

The difference in estimates came two days after the state-owned utility canceled a heavily scrutinized $300 million contract awarded to Whitefish Energy Holdings. The Montana-based company is located in the hometown of U.S. Interior Secretary Ryan Zinke and had only two-full time employees before the storm hit. Crews subcontracted by Whitefish will finish their projects before Nov. 30, officials said.

Ramos continued to praise Whitefish despite local and federal audits of the contract. "They've performed very well," he said.

Ramos said he is recommending that Oklahoma-based Cobra Acquisitions, which has a $200 million contract with the government, subcontract the workers Whitefish had employed if the contract allows for it. Ramos also said Cobra's contract is "practically" the same as the one awarded to Whitefish.

The Army Corps of Engineers said it also expects about 2,100 workers to arrive by mid-November to help restore power.

May 18th, 2018
Latest in Product Development