The engineer would have been the first African-American to live on the International Space Station. 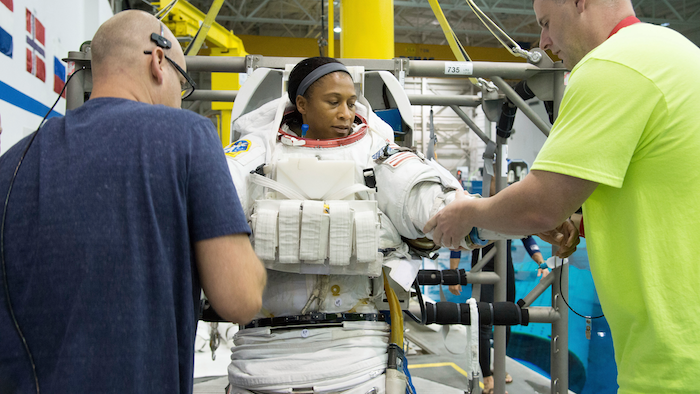 In this Sept. 16, 2014 photo provided by NASA, astronaut Jeanette Epps participates in a spacewalk training session at the Johnson Space Center in Houston. In June 2018, Epps was supposed to be the first African-American to live on the International Space Station, but on Thursday, Jan. 18, 2018, NASA announced it was pulling her off the mission for undisclosed reasons.
Robert Markowitz/NASA via AP

CAPE CANAVERAL, Fla. (AP) — NASA has bumped an astronaut off an upcoming spaceflight, a rare move for the space agency so close to launch.

Astronaut Jeanette Epps was supposed to rocket away in early June, and would have been the first African-American to live on the International Space Station. Late Thursday, NASA announced it was pulling Epps off the mission but didn't disclose why. Astronauts have been removed from missions in the past, mostly for health reasons.

Epps, an engineer, will be considered for future space missions, according to NASA.

She's been replaced by her backup, Serena Aunon-Chancellor, a doctor. Both were chosen as astronauts in 2009.

Epps is returning to Houston from Russia, where she'd been training to fly to the space station with a German and Russian. NASA spokeswoman Brandi Dean said Friday it was a decision by NASA, not the Russian Space Agency.

African-American astronauts have visited the space station, but Epps would have been the first to live there. Space station crews typically stay for five to six months. NASA assigned her to the flight a year ago.