NASA has been paying Russia up to $82 million a seat to ferry U.S. astronauts. 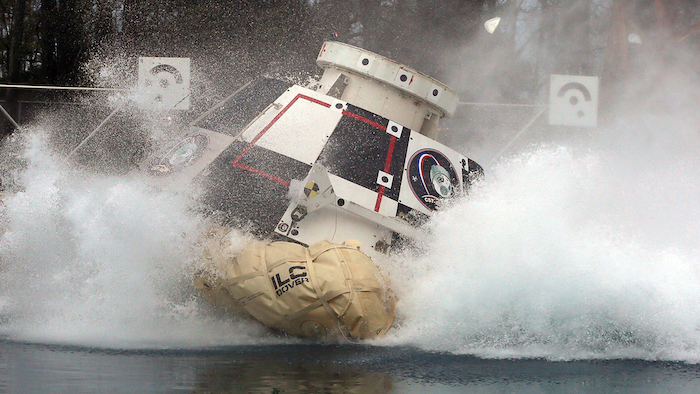 In this Feb. 9, 2016 photo made available by NASA, a mockup of Boeing’s CST-100 Starliner spacecraft, in development in partnership with NASA’s Commercial Crew Program, splashes into a 20-foot-deep basin at NASA’s Langley Research Center in Hampton, Va., during testing of the spacecraft’s landing systems design. On Wednesday, July 11, 2018, the U.S. Government Accountability Office said NASA needs a backup plan for getting astronauts to space, given additional delays on the horizon for new commercial crew capsules.
David C. Bowman/NASA via AP

NASA needs a backup plan for getting astronauts to space, given additional delays on the horizon for new commercial crew capsules, the U.S. Government Accountability Office recommended Wednesday.

That's the top suggestion in the GAO's latest report on the SpaceX and Boeing crew capsules under development.

Both companies have been shooting for test flights by the end of this year. But the GAO warned in its 47-page report that despite progress, further delays are likely. If postponements keep mounting, the GAO fears there could be a gap in U.S. access to the International Space Station.

With its last shuttle flight seven years ago this month, NASA has been paying Russia up to $82 million a seat to ferry U.S. astronauts to and from the International Space Station. But that contract is up at the end of next year.

"NASA is considering potential options, but it does not have a contingency plan for ensuring uninterrupted U.S. access," the report by the Congressional watchdog agency stated.

The audit also found that NASA lacks a consistent approach in gauging crew risk in these new spacecraft.

"NASA must balance safety with acceptable risk for human spaceflight," the report stated.

NASA's human explorations chief, William Gerstenmaier, said the space agency is actively working on options to keep Americans living and working, uninterrupted, at the station. He also noted that while the different documentation for measuring crew risk can be confusing, it is up to NASA's commercial crew program to assure the proper safety guidelines.

SpaceX and Boeing have been vying to be the first to return Americans to space from U.S. soil since 2014, three years after NASA's shuttle program ended. That's when NASA awarded contracts totaling nearly $7 billion to SpaceX and Boeing to develop crew capsules and demonstrate them in flight. The agreement called for the spacecraft to be certified by 2017.

The SpaceX capsule is a beefed-up, human-rated version of the Dragon capsule already used to deliver cargo; Boeing's craft is named Starliner.

Each company plans a test flight without passengers, before putting astronauts on board.

Currently, there are three Americans at the space station, along with two Russians and a German.