Analysts predicted that positive sales would continue through the end of the year fueled by customers whose cars were destroyed by Harvey and Irma. 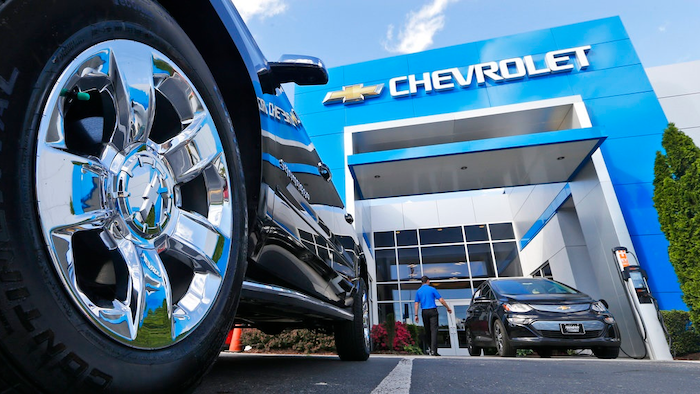 This Wednesday, April 26, 2017, photo shows the logo on the wheel of an SUV in front of a Chevrolet dealership in Richmond, Va. General Motors and Ford each posted strong U.S. sales in September 2017, confirming predictions that the industry could rebound for the month.
AP Photo/Steve Helber

DETROIT (AP) — The auto industry posted its first monthly sales gain of the year in September, led by strong truck and SUV sales and the replacement of cars destroyed by Hurricane Harvey in Texas.

Industry analysts predicted that positive sales would continue through the end of the year fueled by customers whose cars were destroyed by Harvey and Hurricane Irma in Florida. But sales aren't expected to be strong enough to match last year's record of more than 17.5 million.

"While this strong level of demand isn't expected to be sustained throughout the fourth quarter, these short-term supports are not likely to drop off in a meaningful way, setting the stage for strong Q4 results," Hopson said in a statement.

GM reported on Tuesday that sales rose 11.9 percent from a year ago, while Ford sales rose 8.7 percent. Toyota posted a 14.9 percent increase, while Nissan sales were up 9.5 percent and Honda sales rose 6.8 percent. Volkswagen said its sales rose 33.2 percent over numbers that were depressed a year ago by its diesel emissions cheating scandal.

Fiat Chrysler sales fell 10 percent and Hyundai, which relies on cars for much of its results rather than SUVs and trucks, saw sales fall 14.4 percent. Both blamed reductions in sales to big fleet buyers such as rental car companies.

Industry analysts had predicted a small sales rise for the month, with the Edmunds.com auto site expecting a 0.4 percent increase. But automakers, aided by hurricane sales, powered past the forecasts.

For the first nine months of the year, overall industry sales were down 1.8 percent. September sales would have been even higher without Hurricane Irma, which forced many Florida dealerships to close for a week or longer due to lack of electric power.

Ford gained 5,000 to 6,000 sales from replacement of flooded cars in the Houston area, where it offered employee pricing. But it lost about 1,000 vehicle sales in Florida due to closed dealerships, Vice President of Sales and Marketing Mark LaNeve said on a conference call. He expects industry sales to get a boost through the rest of the year from cars being replaced due to hurricane damage.

Ford's F-Series pickup sales rose 21 percent from a year ago, while SUV sales were up 8.8 percent. Inventory levels dropped to a 72-day supply, and LaNeve said Ford may even increase production to raise that a little. Automakers have been trimming production, especially of cars, for much of the year.

Even car sales, which have been battered during the past few years as buyers switched to SUVs and trucks, showed a bit of life. For instance, Toyota's midsize Camry, once the top-selling car in the U.S., posted a 13 percent sales gain as all-new 2018 models reached showrooms. Honda's Accord, once the No. 2-selling car, saw a 9.5 percent increase.

Still, Edmunds predicted that midsize cars would drop to the fifth-largest segment so far this year with just 10.7 percent of the market, the lowest share recorded since Edmunds began tracking numbers in 1991. Midsize cars were the top-selling segment in the U.S. just three years ago, but have been passed by compact SUVs, large trucks, midsize SUVs and even compact cars, Edmunds said.