The company will improve laborer pay and working conditions. 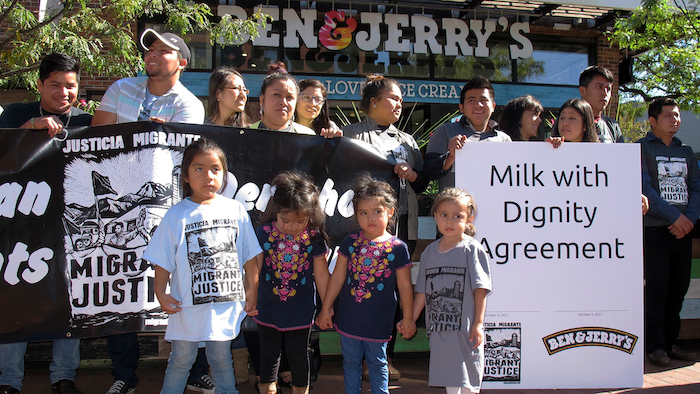 Children stand in front of a banner commemorating an agreement signed by ice cream maker Ben & Jerry's and immigrant farm workers, Tuesday, Oct. 3, 2017, in Burlington, Vt. The agreement promotes the rights of immigrant farm workers while paying more to the farmers who employ them. The company and the workers said it's the first agreement of its kind in the dairy industry.
AP Photo/Wilson Ring

BURLINGTON, Vt. (AP) — Ice cream maker Ben & Jerry's promised Tuesday to improve the pay and working conditions of laborers hired by the farms that provide milk for the Vermont-based company's quirky flavors while promising to pay the farmers who employ the workers more.

The "Milk with Dignity" agreement was signed by Ben & Jerry's CEO Jostein Solheim and members of the group Migrant Justice. It assures the human rights of the workers and ensures better relations with farmers because workers will do a better job, said Enrique "Kike" Balcazar, a 24-year-old farmworker from Tabasco, Mexico, who has worked in Vermont for seven years and is now a leader of Migrant Justice.

"And Ben & Jerry's wins ... because they will sell a product that assures the human rights of the workers so the consumers will receive a just product. That is milk with dignity," Balcazar said.

Solheim said the agreement is the first of its kind in the dairy industry in the United States and possibly the world.

"It's an agreement that puts the worker in charge of workers' rights," he said. "It's a worker-led movement, but it's a very clever system. It's a system that really does create a win, win, win."

About 85 percent of the milk Ben & Jerry's uses in its ice cream made in North America comes from about 80 Vermont dairy farms, many of which rely on immigrant labor.

Balcazar said a survey of workers found 40 percent didn't get a day off and 40 percent weren't paid a minimum wage. Most farms provide housing and the workers need a minimum housing standard.

The program establishes a standards council, an independent nonprofit that will work with farmers and farmworkers to ensure workers are treated fairly.

Solheim called it a collaborative process of arriving at an outcome for the farmer and the farmworker that would be different for every farm. He said the extra money paid to farmers would not result in more expensive ice cream. The company will absorb the cost as a part of doing business, he said.

"When you buy Ben & Jerry's you are buying those values and those standards," he said.

Eventually all the farms that provide milk to Ben & Jerry's will be required to participate in the program. After that, it could spread to other parts of the country.

Balcazar said many farmers treat their workers well, while others need help and support.

"Today we are taking a big step with us, the workers, to make this a reality," he said. "We are calling this a new day in the dairy industry in Vermont."