Storm surge has emerged as one of the most destructive forces on infrastructure. 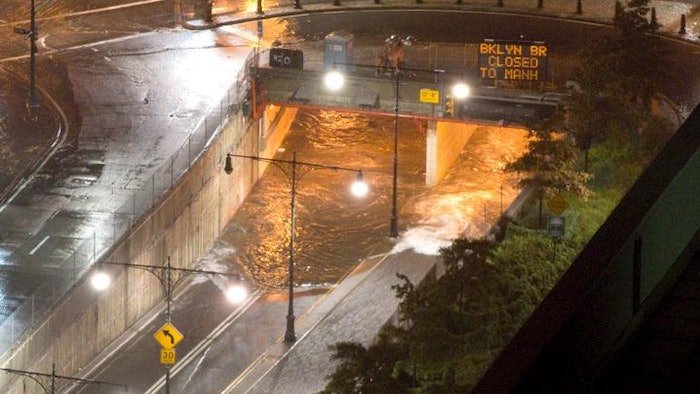 These are flooding conditions at the Hugh L. Carey Tunnel (formerly the Brooklyn-Battery Tunnel) during Hurricane Sandy.
Jay Fine

With the recent Hurricanes Harvey, Irma, and now Maria, which ravaged much of Texas, Florida, and Puerto Rico, as well as Hurricane Katrina and Superstorm Sandy, from which NYC infrastructure is still recovering, it has become clear that addressing threats to infrastructure is critical to keeping our communities safe, functional, and healthy.

"Events like these powerful hurricanes have underscored the need for comprehensive plans to protect our infrastructure," says Deodatis, Santiago and Robertina Calatrava Family Professor of Civil Engineering, and Chair, Department of Civil Engineering and Engineering Mechanics, who uses probabilistic methods to study the effects of natural hazards, including climate change and extreme weather, to the civil infrastructure. "The two hazards of storm surge and sea level rise carry a high level of uncertainty, and when combined, create a major risk to our coastal infrastructure. We urgently need to develop a multi-pronged approach that takes into account how infrastructure is interconnected and how failures in one type of infrastructure can impact the other."

The team will use the grant to address the threat from storm-induced flooding to interdependent infrastructure -transportation, power systems, and emergency services -- by designing a methodology that can test various adaptation strategies and their ability to protect these important life-lines. They will investigate strategies such as building sea-walls or artificial sand dunes, elevating houses and other structures, and other physical, protective options.

Beyond assessing the efficacy of protective measures, they will address related questions such as deciding how coastal protection might impact other recreational, cultural, and economic activities, and how to reduce the negative impact while maximizing coastal protection.

"Evaluating resource constraints and how to optimally protect a community given its constrained resources is critical," says Bienstock, Professor of Industrial Engineering and Operations Research and of Applied Physics and Applied Mathematics, who is an expert on power transmission networks, including electrical power grids. "These questions require the combination of advanced computing, mathematics, and social science approaches not only to design tools that address these complex, intersecting problems, but also to provide them to the decision makers who must make these critical decisions."

The researchers will use computational methods to determine flooding levels using an ensemble of storms representing the likely threat together with future rising sea-level scenarios. They will estimate the potential damage to the infrastructure they are considering and then use the data to evaluate the effectiveness of a given strategy, including both cost and social acceptability.

"This is a process that will repeat iteratively until we find a sufficiently optimal strategy," says Mandli, Assistant Professor of Applied Physics and Applied Mathematics, who uses computational methods to study geophysical shallow mass flows such as tsunamis, debris-flow, and storm-surge. "Developing this methodology will be challenging as the magnitude of the computational effort needed is significant. We'll use a set of computational models that vary in accuracy and speed with the resulting methodology able to swap between models appropriate for the situation at hand."

The Columbia Engineering team notes that the success of their methodology depends on stakeholder engagement, and so they are working with scientists from the National Center for Atmospheric Research to set up interviews with key stakeholders such as the MTA, the Port Authority, and the city and state offices of emergency management. The interviews will help the researchers to identify critical components of infrastructure and the interdependencies among them that could be adversely impacted by coastal flooding.