Trump has promised economic growth of 3 percent, and insists that slashing taxes for individuals and corporations is the way to achieve it. 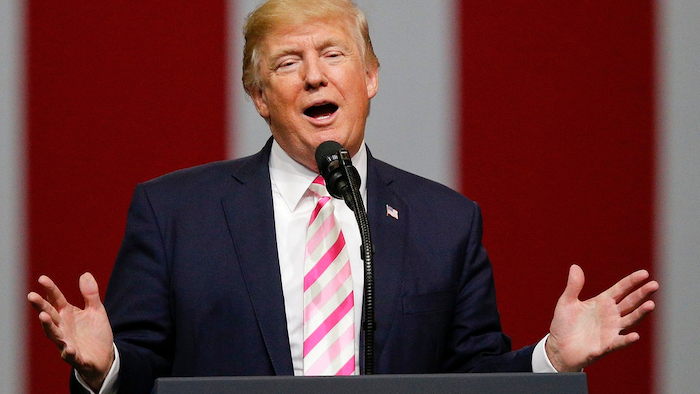 In this Sept. 22, 2017, photo President Donald Trump speaks at a campaign rally in Huntsville, Ala. Trump says he wants to lure Democratic lawmakers to sign on to a Republican-crafted tax overhaul plan.
AP Photo/Brynn Anderson

WASHINGTON (AP) — Poised to reveal a tax plan that is a pillar of his economic policy, President Donald Trump is promising "the largest tax cut in the history of our country."

Trump's declarations came as the health care legislation brought forward by Republicans teetered near failure. He said his "primary focus" is the tax overhaul plan, which would be the first major revamp of the tax system in three decades.

Trump has promised economic growth of 3 percent, and insists that slashing taxes for individuals and corporations is the way to achieve it. He said the tax plan that the White House and Capitol Hill Republicans have been working on for months is "totally finalized." He was speaking on the tarmac at the Morristown Municipal Airport.

Trump's details weren't firm. He said "I hope" the top corporate tax rate will be cut to 15 percent from the current 35 percent. House Speaker Paul Ryan has said a 15 percent rate is impractically low, with a rate somewhere in the low- to mid-20 percent range more viable to avoid blowing out the deficit. The rate is "going to be substantially lower so we bring jobs back into our country," Trump said.

Trump also said "We think we're going to bring the individual rate to 10 percent or 12 percent, much lower than it is right now." He did not say whether the tax rate for the wealthiest Americans, now at 39.6 percent would be cut, as some Republicans have advocated.

"This is a plan for the middle class and for companies, so they can bring back jobs," he said.

The plan also is expected to reduce the number of tax brackets from seven to three.

Trump spoke as House Republicans on the tax-writing Ways and Means Committee huddled behind closed doors to discuss the plan. They have promised to reveal an outline and possible details of the plan later this week, after all Republican lawmakers in the House get a chance to discuss it and put questions to the chief architects, including Rep. Kevin Brady, R-Texas, who heads the Ways and Means panel.

"We'll let the White House determine the timetable" of releasing the plan, Brady said following the meeting. He added it will "definitely" occur this week.

Republicans have been split on some core issues. They are divided over whether to add to the nation's soaring $20 trillion debt with tax cuts. The GOP also is at odds over eliminating the federal deduction for state and local taxes.

Republican senators on opposing sides of the deficit debate have tentatively agreed on a plan for $1.5 trillion in tax cuts. That would add substantially to the debt and would enable deeper cuts to tax rates than would be allowed if Republicans followed through on earlier promises that their tax overhaul wouldn't add to the budget deficit. That would mark an about-face for top congressional Republicans like Senate Majority Leader Mitch McConnell and Ryan, who had for months promised it wouldn't add to the deficit.

Earlier Sunday, Treasury Secretary Steven Mnuchin said in a television interview the plan "creates a middle-income tax cut, it makes businesses competitive and it creates jobs." He added that there are changes, too, for the "high end," including "getting rid of lots of deductions." He did not offer specifics.