He is charged with defrauding investors of $7.7 billion. 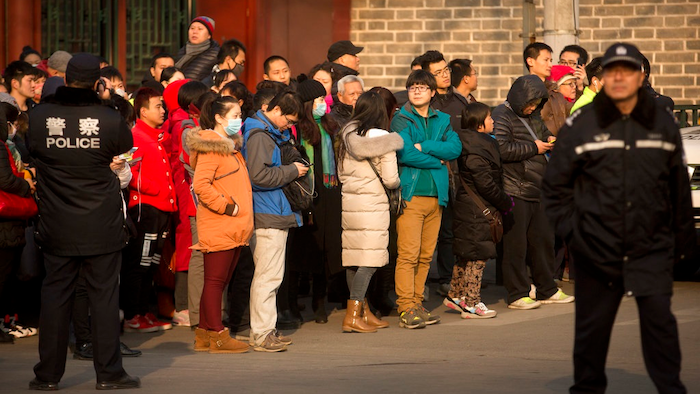 In this Jan. 1, 2016, file photo, policemen watch as depositors from Ezubo gather outside the State Bureau for Letters and Calls Reception Division office in Beijing. The founder of a Chinese online peer-to-peer lender has been sentenced to life in prison Tuesday, Sept. 12, 2017, on charges he defrauded investors of $7.7 billion in one of China's biggest financial scams.
AP Photo/Mark Schiefelbein, File

BEIJING (AP) — The founder of a Chinese online peer-to-peer lender has been sentenced to life in prison on charges he defrauded investors of $7.7 billion in one of China's biggest financial scams.

Ezubo was the biggest competitor in an informal finance industry that Chinese authorities allowed to flourish with little oversight over the past decade to support entrepreneurs who cannot get loans from state banks. A series of lenders have collapsed as economic growth slowed, leaving authorities struggling to defuse protests by depositors.

Ezubo's founder, Ding Ning, and his younger brother, Ding Dian, were sentenced Tuesday to life by the Beijing No. 1 Intermediate People's Court for "fundraising fraud," according to the official Xinhua News Agency.

It said another 24 executives were sentenced to prison terms ranging from three to 15 years.

Two companies affiliated with Ezubo were fined a total of 1.9 billion yuan ($291 million), Xinhua said. It said some defendants also were convicted of offenses including smuggling precious metals and illegal gun possession.

Regulators seized Ezubo in December 2015 on charges of taking deposits without a license. Xinhua said authorities have confiscated the company's assets to repay depositors but gave no indication how much money was recovered.

Regulators allowed private sector lending to support entrepreneurs who create China's new jobs and wealth but are largely shut out of lending by the state-owned banking industry. The national bank regulator estimated in 2015 the industry had grown to $1.5 trillion.

Beijing tightened control as defaults mounted following the 2008 financial crisis. The finance industry as a whole has come under tougher scrutiny after a plunge in stock prices in 2015 led to accusations of insider trading and other offenses.

Ding, 34, was a high school dropout who worked at his mother's hardware factory, where he gained experience running online sales, according to media reports. With no technical or financial training, Ding launched Ezubo in July 2014 and opened marketing offices across China.

Ezubo appeared to gain Beijing's endorsement when the Cabinet website, gov.cn, published an interview with Ding discussing his life as an entrepreneur. That interview has since been removed.

The seizure of Ezubo prompted protests by depositors who complained the government failed to protect them.

Depositors traveled to Beijing to protest at government offices and the headquarters of state television, which had broadcast advertisements for Ezubo.

Ezubo attracted deposits by promising returns of 9 to 14.6 percent, according to investigators. But authorities say a former executive admitted 95 percent of those borrowers were fictional entities created by Ezubo. In a confession broadcast by state television in February 2016, the executive called the company "a fraud ... a typical Ponzi scheme."

The court said Ding and other defendants "inflicted huge losses on investors in many parts of China and disrupted the national financial management system," according to Xinhua.

The internet has helped lenders attract money from working class or rural depositors, many of them financial novices with little knowledge of the risks involved.

After Ezubo depositors poured out their anger on Chinese social media, police phoned some internet users to warn them against criticizing the Communist Party online.

One investor from northeastern China who lost 480,000 yuan ($76,000) told The Associated Press that police confiscated her computer and cell phone after she posted online that she might file a petition with the central government.

Earlier, two businesswomen in southern China were sentenced to death in 2012 and 2013 in separate cases on charges of "illegal fundraising." The penalty for the first was converted to a prison term following an outcry online that it was too severe.