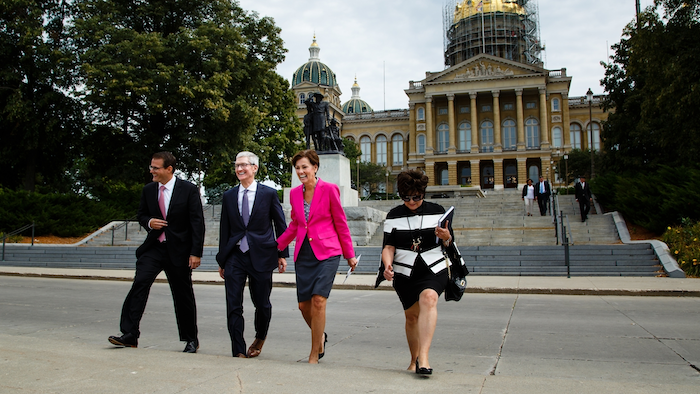 DES MOINES, Iowa (AP) — Iowa approved a deal Thursday to give Apple $208 million in state and local tax breaks to build two data storage centers near Des Moines and to create at least 50 jobs — a pact that critics quickly panned.

The deal approved by the Iowa Economic Development Authority includes a refund of $19.6 million in state sale taxes for Apple Inc. and a $188 million break on property taxes from Waukee, a booming suburb bordering Des Moines.

In addition to the promised 50 jobs, Apple has agreed to buy 2,000 acres of land for the $1.4 billion project, enough to allow for future development, said Debi Durham, the state's economic development director.

At an event with Republican Gov. Kim Reynolds outside the Capitol building, Apple CEO Tim Cook credited Iowa's "world-class power grid" and what he called the state's culture of developing computer programmers who have created applications ranging from education to entertainment.

"At Apple we admire what you guys have accomplished and we want to be a part of it," Cook told cheering supporters. Neither he nor the governor took questions at the event.

Cook promised to invest $100 million to a newly created public improvement fund to be used for community development, including the revitalization of streets, libraries and parks. The first project will be a youth sports campus that can host community and high school games and that will include a greenhouse, playground and fishing pier.

Critics questioned the wisdom and fairness of giving such tax breaks to one of the world's richest companies.

"It's a net fiscal loss that it's a straightforward giveaway in the economy to a company that's extraordinarily wealthy and it makes no sense from an economist's point of view. It only makes sense from a politician's point of view," said David Swenson, an economist at Iowa State University and critic of such large economic development project tax breaks.

Reynolds, speaking briefly to reporters after the announcement, defended the use of the state's $19.6 million in tax credits at a time when the state budget shortfall that may require a special legislative session to address, saying it's a minimal investment for the return Iowa will get.

"If we want to grow this economy and provide more revenue, then we should be doing what we can to bring jobs and businesses to the state of Iowa," she said. "This puts Iowa on the world stage. This gives us the opportunity with a global company like Apple to say we are the place to be.

Google, Facebook and Microsoft have already built billion-dollar data centers in Iowa. Like Apple, they were drawn to the state by its generous tax breaks, wind-generated electricity and relative security from natural disasters that could disrupt service.

"They say we should go to Iowa because we have these epicenters there. And as you look at the age demographics and the growth of Iowa, I think it's really difficult to challenge the fact there are ancillary growth benefits from making an investment like this," he said.