Rust Belt state will have to quickly transition to a more highly skilled workforce. 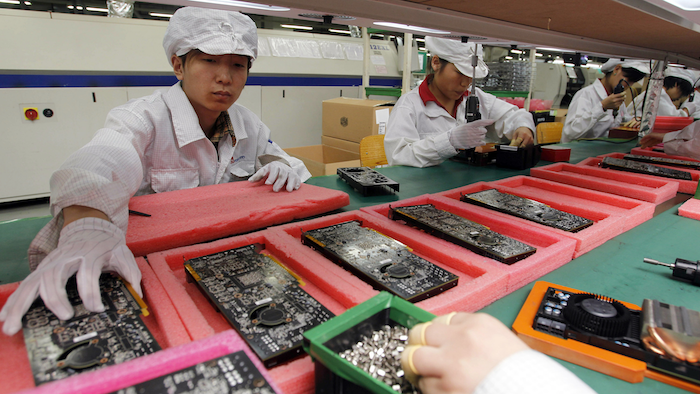 MILWAUKEE (AP) — A Rust Belt state that built a manufacturing legacy through assembly-line jobs will have to quickly transition to a more highly skilled workforce now that Foxconn has selected Wisconsin as the site of its coveted U.S. electronics plant.

"This will not be your grandfather's factory," said Tom Still, president of the Wisconsin Technology Council. "This will be a high-tech facility that will attract workers of various skill levels to produce products that will really define where the economy is going to go for years to come."

Foxconn is best known for making iPhones and other Apple products in China. It entered into a memorandum of understanding Thursday to build its first U.S. manufacturing plant in Wisconsin — a decision cheered for its potential to transform the state's economy. But many questions remain, including the type of jobs the Taiwan-based electronics giant will offer and whether it will follow through on its plans.

The deal calls for finalizing terms of the agreement — which will require a special legislative session to approve a $3 billion incentive package — no later than Sept. 30. Gov. Scott Walker and Foxconn CEO Terry Gou signed the memorandum inside Milwaukee's art museum, a white, winged-shaped structure by Santiago Calatrava that sits on Lake Michigan. The project to bring Foxconn to Wisconsin was called "Flying Eagle," they said.

Foxconn said its $10 billion factory — at a yet-to-be-determined site in southeastern Wisconsin — will initially bring 3,000 jobs and eventually employ 13,000 workers. It would be a substantial gain for a state that currently has 472,000 manufacturing jobs and is still recovering from factory layoffs — including the closure of a General Motors plant after the 2008 financial crisis.

Foxconn has not said what type of jobs it will offer in order to produce liquid-crystal display panels that are used in televisions and computer screens. But the average salary for the jobs will be nearly $54,000, suggesting some of the higher-end positions will be engineers, software developers and people proficient in computer-assisted design, Still said.

"For an indicator I would look at Michigan. There's lots of workers in Michigan and there's lots of advanced manufacturing jobs in Michigan, and most of them are difficult to fill," said Stefanie Lenway, dean of the Opus College of Business at the University of St. Thomas in Minneapolis.

Lenway also said that making LCD screens doesn't involve people "because people create defects on the glass and that's expensive," so it's unclear how many of the jobs will be for assembly workers.

Still said worker shortages for higher-skilled jobs are common around the country and it's a challenge that Foxconn could've faced with any of the other states it was considering — Michigan, Illinois, Indiana, Ohio, Pennsylvania and Texas.

But Wisconsin officials say the state's higher education system is capable of producing enough employees by the time the plant opens in 2020. However, it's a process that needs to start now.

Walker said part of wooing Foxconn to Wisconsin included meetings with chancellors from the University of Wisconsin-Madison and UW-Milwaukee and the president of Gateway Technical College to talk about training opportunities so graduates would be prepared to work at the plant.

"For something of this magnitude we're going to have to quite literally start training people now for jobs that will be open over the next couple of years," Walker said Thursday during an interview on WTMJ-AM. "We're going to start doing programs specifically targeted towards getting the workforce they're going to need."

To close the Foxconn deal, state lawmakers still have to approve a $3 billion worth of tax credits for the company. The incentive package, which lawmakers could take up in a special session next month, will be pro-rated on how many jobs the company creates and how much it spends.

Walker and other state officials have said the trade-off for the incentives will pay off in the long run, noting that Foxconn's presence will create thousands of other jobs through the hundreds of suppliers it will rely on for materials.

Walker said Democrats who were skeptical of the deal were "cynics."

But the full impact of Foxconn's planned factory may still be too early to measure, according to an economics expert at the UW-Milwaukee.

"It's difficult to assess how this factory, if in fact it comes to be, will affect the labor market without knowing what the jobs are," said Marc Levine, senior fellow and founding director of UWM's Center for Economic Development.

Critics have also cautioned that Foxconn has made promises before to invest in the U.S. and not followed through. Foxconn promised in 2013, for example, to invest $30 million and hire 500 workers for a new, high-tech factory in Pennsylvania that was never built.

"So I think there's some question about the modus operandi of Foxconn on these sorts of things," Levine said.