The company selected to be the lead developer for the Foxconn campus is run by Walker's campaign finance chairman for his re-election bid this year. 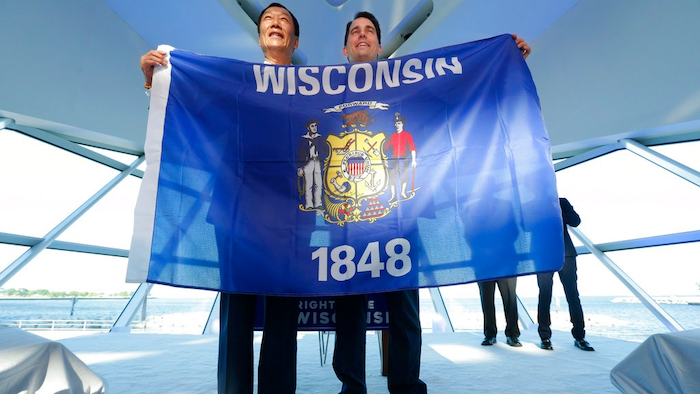 MADISON, Wis. (AP) — Foxconn Technology Group on Monday selected a company led by a Republican megadonor with close ties to Gov. Scott Walker to develop the master plan for its massive campus in Wisconsin.

The Taiwan-based electronics giant said it chose Hammes Company to be the lead developer on the $10 billion project that will house a display-screen factory on a campus spread over 2,900 acres (1173.61 hectares) not far from the Illinois border. Foxconn could qualify for up to $4.5 billion in state and local taxpayer incentives if it employs 13,000 workers as envisioned.

Hammes is led by Jon Hammes, Walker's campaign finance chairman for his re-election bid this year. Hammes is part owner of the NBA's Milwaukee Bucks and has given hundreds of thousands of dollars to Republicans, including more than $15,000 to Walker, and GOP causes over the years.

Hammes said in a statement that he was "delighted" to have his Milwaukee-based company selected and it will provide "planning, strategic advisory and development related services."

Alan Yeung, Foxconn's director of U.S. strategic initiatives, called the Hammes Company "one of the most trusted providers of real estate solutions in the United States." Yeung said the goal of the Foxconn project in Wisconsin is to become a "key base for scientific and technology cooperation between the U.S. and Asia, where technical talent and entrepreneurs in America can meet investors and leading technologists from Japan, China and elsewhere from Asia."

Democrats who opposed the Foxconn project as a taxpayer boondoggle pointed to the selection of Hammes as another example of political cronyism.

"It didn't take long for millions of taxpayer dollars promised to Foxconn to end up in the hands of Scott Walker's re-election campaign people," said Wisconsin Democratic Party chairwoman Martha Laning. "Foxconn, like everything else, is all about helping Scott Walker save his own career and not about the people of Wisconsin."

More than a dozen Democrats are running for a chance to take on Walker in August. Several of them took to social media to decry the Hammes pick.

Kelda Roys, a former state lawmaker who is also running, tweeted that she wasn't surprised because "brazenly corrupt behavior is exactly what we've come to expect from Walker."

And Democratic state Rep. Dana Wachs, another candidate, tweeted "I'm running out of 'surprise and outrage,' for all this back-door dealing Gov. Walker is doing. He's lining the pockets of his campaign donors with TAXPAYER MONEY. It's got to stop."

Walker spokeswoman Amy Hasenberg said the state has no authority over such a decision, and said Democrats "are choosing to attack the creation of real family sustaining jobs in our state."

Hammes donated $150,000 in 2015 to a political action committee backing Walker's run for president. Campaign finance records show Hammes has given more than $15,000 to Walker since 2005.