Duke wants to force consumers to help pay for the cleanup of its coal ash pits. 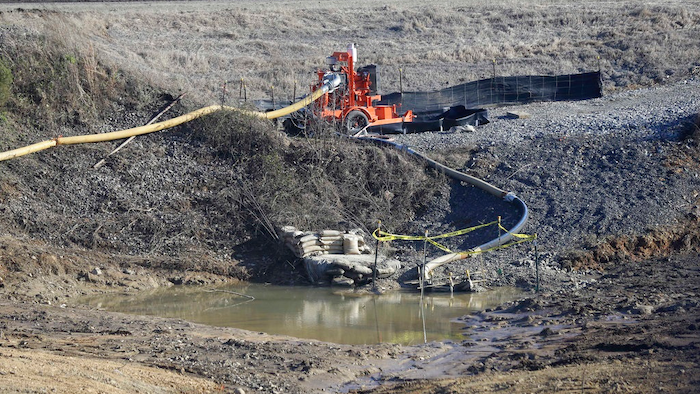 In this Thursday, Jan. 14, 2016, photo, a drainage pipe that was the original culprit of the coal ash spill is shown at the Dan River Steam Station in Eden, N.C. Duke Energy Corp. is digging up and hauling away from riverbanks the toxic coal residues two years after one of the worst coal-ash spills in U.S. history. The nation’s largest electric company now wants regulators in North Carolina to force consumers to pay nearly $200 million a year to clean up the toxic byproducts of burning coal to generate power. The request filed with state utility regulators in June 2017 is the first time Duke Energy Corp. has sought permission to have North Carolina consumers pay part of its costs of cleaning up the waste, which are estimated to total $5.1 billion in North and South Carolina alone.
AP Photo/Gerry Broome, File

RALEIGH, N.C. (AP) — The nation's largest electric company wants regulators in North Carolina to force consumers to pay nearly $200 million a year to clean up the toxic byproducts of burning coal to generate power. That doesn't sit well with neighbors of the power plants who have been living on bottled water since toxic chemicals appeared in some of their wells.

"They want to pass their mistakes on to the land owner. This is not fair," wrote Nancy Gurley, who lives near the utility's plant in Goldsboro.

She was responding to a request filed with state utility regulators last month that marks the first time Duke Energy Corp. has sought permission to have North Carolina consumers pay part of its costs of cleaning up the waste, which are estimated to total $5.1 billion in North and South Carolina alone.

Duke Energy Progress would raise electricity bills of 1.3 million North Carolina customers by an average 15 percent, generating an extra $477 million a year, with an 11 percent return on a measure commonly described as potential profit margin. The bulk of that would cover ongoing costs of replacing coal-burning plants with natural gas and storm repairs. But it also includes $66 million already spent to deal with coal ash, and $129 million more in future clean-up costs.

Duke Energy Carolinas — the holding company's other North Carolina subsidiary — is expected to request a rate hike for its 2.5 million customers for similar reasons in the coming months.

Coal ash contains arsenic, lead, mercury and other elements that may be hazardous in sufficient concentrations. Duke Energy denies that its basins contaminate the surrounding groundwater. But environmentalists and state regulators say those heavy metals could be seeping through the unlined bottoms of pits where liquefied coal ash has been stored for decades, into natural sources for wells where worrying concentrations have been documented.

Charles Walker Jr. has been forced to use bottled water, mostly provided by Duke Energy, since the chemicals showed up in his Belmont neighborhood, near the company's Allen power plant in western North Carolina.

He says shareholders and high-paid executives of the $59 billion company should be paying for all this, not the customers.

"In my opinion, if you're going to be negligent, if you made a mistake, you need to feel the sting. Don't just pass it on," Walker said in an interview. "If a septic company comes to my house and accidently spills sewage all over my property, are they going to send me the bill for that?"

Duke Energy said it stored coal ash in line with past industry practices and regulations. Just as buying and burning coal were part of the cost of generating electricity over the decades, so now is the expense of cleaning up the ash, it said.

The company is generating an average of about 150 pounds of coal ash a year for each household, Duke Energy spokeswoman Paige Sheehan said.

"It is our job to manage that appropriately, which we are doing," she said.

Duke Energy's clean-up plan includes excavating coal ash and moving it away from waterways at eight of the 14 North Carolina sites and two others in South Carolina. The company plans to dry out, cover and leave in place the ash in other North Carolina pits. A North Carolina law passed last year also requires the company to pay for well-water replacements for about 1,000 other households, either by extending municipal water lines or providing filtering systems.

The company based in Charlotte delivers electricity to 7.5 million customers in the Carolinas, Indiana, Ohio, Kentucky and Florida. It already persuaded South Carolina's utilities commission in December to allow it to start recouping coal ash cleanup costs as part of a $56 million rate increase that includes a 10 percent potential profit margin.

Gurley is one of about three dozen people living near coal-burning plants who filed comments with the state at the urging of their lawyers.

"We think this is not a proper cost to pass along to the general public," said their attorney, John Hughes.

Duke Energy was forced to address its coal-ash storage in response to new federal regulations and a 2014 accident in which waste from a pit at a North Carolina plant ruptured, coating miles of the Dan River in gray sludge. The Charlotte-based company pleaded guilty in 2015 to nine criminal violations of the federal Clean Water Act for pollution at five coal-fired plants including Goldsboro. It agreed to pay $102 million in fines and compensation.