The nation's shift away from coal for electricity has reduced the supply of fresh coal ash. 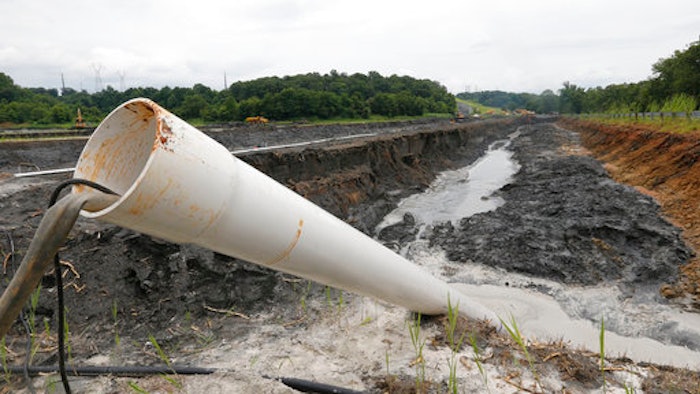 In this Friday June 26, 2015 file photo, a drain pipe sticks out of a coal ash retention pond at the Dominion Power's Possum Point Power Station in Dumfries, Va. The company is moving coal ash from several ponds to one lined pond. As Virginia and its public utilities struggle to cope with the coal ash buried in pits and ponds across the state, tons more of the industrial byproduct is being imported each year.
AP Photo/Steve Helber, File

RICHMOND, Va. (AP) — Shipping containers full of coal ash from China, Poland and India have come into the U.S. through the Port of Virginia as foreign companies find a market for the same industrial waste that America's utilities are struggling to dispose of.

Critics call it a missed opportunity. Coal ash is treasure as well as trash, useful for projects from roads to concrete to wallboard. They want Virginia to mandate more recycling of the ash that's already here, threatening to contaminate water sources or create an environmental disaster.

"We have millions of tons of this sitting along our riverbanks," said Travis Blankenship, former government affairs manager for the Virginia League of Conservation Voters. "Why in the world would we be importing it from other states and countries?"

The nation's shift away from coal for electricity has reduced the supply of fresh coal ash, forcing industries that depend on it to look farther afield. Some turn to companies that have figured out how to reprocess ash discarded years ago in pits and ponds. Others look overseas.

The Port of Virginia handled just one shipping container of coal ash in 2015, from India. Last year, there were about 22, from China and Poland. It all went on to Ohio and Wisconsin, according to a port spokesman who didn't know the final destinations. Meanwhile, more ash has been trucked in from other states for concrete production in Virginia.

Coal ash is an umbrella term. It includes bottom ash, which settles in boilers; fly ash, a powdery material captured in exhaust stacks; and synthetic gypsum, a byproduct of smokestack "scrubbing."

These materials can be had for several dollars a ton if trucked directly from a utility to a factory or job site. They're more expensive to obtain in a useful form after decades underground or underwater. That makes foreign imports economically viable.

Nationally, there are more than 1,100 coal ash dumps, many unlined. In 2014, the Environmental Protection Agency classified coal ash as nonhazardous, partly to avoid a "stigma" that might discourage proper containment and recycling, the agency said.

The EPA stressed that this waste, with heavy metals such as arsenic, mercury and lead, must be properly managed to avoid risks to human health.

"We have two children who have been poisoned by this," Dan Marrow, who lives near a coal ash pond in northern Virginia, told lawmakers last month.

Marrow is convinced a power station pond tainted his well and caused his daughters' health problems. Dominion Virginia Power recently agreed to hook residents up to public water lines. Marrow says that's an admission of guilt; Dominion says it's being a good neighbor.

On Thursday, a federal judge ruled that arsenic is flowing out of a separate Dominion coal ash site in violation of the Clean Water Act, but imposed no fines after finding no threat to health or the environment.

Dominion is closing 11 ponds containing around 29 million cubic yards of ash at four Virginia power stations to comply with EPA rules. It's been proceeding largely by treating and releasing the water, consolidating some ponds and capping the remaining dry material. The company insists its process is safe.

Meanwhile, the ash has real value, and technology to reprocess it is already being used.

"We can ... take the material that would be an environmental liability and transform it into something that has a beneficial use," said Jimmy Knowles of The SEFA Group, which partners with utilities in South Carolina and Maryland to recycle both old and new ash.

SEFA competitor Separation Technologies can do the same thing.

"When I tell friends and family what my company does, they think we would have hundreds of these facilities around the country," said Tom Cerullo, of the Boston-based company.

But utilities are slow to embrace change, and recycling lacked a catalyst until recently, Cerullo said.

A 2008 spill in Tennessee drew attention to coal ash storage. In 2014, a pipe ruptured at a Duke Energy plant in North Carolina, polluting the Dan River with miles of sludge.

"We could do the same thing in Virginia. I think the reason we're not is Dominion's resistance to pursuing what is an emerging industry standard," Southern Environmental Law Center attorney Greg Buppert said.

"We'd like to use fly ash in every yard we produce," said Eric Misenheimer, at Chandler Concrete Co., which operates dozens of North Carolina and Virginia plants.

Virginia mandates fly ash as an additive in transportation department projects, but ash production has been declining since around 2008, according to the American Coal Ash Association. Chandler has turned away foreign providers because of supplies from SEFA, Misenheimer said.

"Obviously, when we have a shortage, we have a hard time filling those obligations. Last year was pretty tough for us," said Morgan Nelson, of S.B. Cox, another Virginia concrete-maker.

After Democratic Sen. Scott Surovell learned about the foreign imports, he proposed requiring Dominion, the state's largest utility and biggest contributor to Virginia politics, to recycle a minimum amount of ash annually. That bill failed, but another measure of his survives and got a boost Wednesday from Democratic Gov. Terry McAuliffe. It would deny closure permits until after the utility tells regulators more about its ash impoundments, including recycling plans and clean-closure options.

The Republican-controlled Legislature stripped the requirement that permits be contingent upon this information. McAuliffe restored it and returned the amended bill to legislators, saying such information has to be shared before a permit is issued to restore public confidence.

Thirty-one percent of Dominion's freshly burned ash was recycled last year, Richardson said. On average, U.S. utilities recycled 52 percent in 2015, the latest year with available data, according to the ACAA. No one tracks how much ash arrives at ports nationwide, though the ACAA is starting to try.

At least one utility, WE Energies in Wisconsin, recycles 100 percent of its freshly burned waste. Its fly ash was used to build the Milwaukee Art Museum, bottom ash is used for structural fills and road bases, and gypsum is sold as soil additive.

"We were very good at building landfills and filling them up," said Bruce Rammey, of parent company WEC Energy Group. He became convinced in the 1980s that recycling's cheaper in the long run.

WE Energies hasn't completely eliminated its legacy coal ash, however. In 2011, a bluff collapsed near a power plant outside Milwaukee, sending soil, coal ash and other debris into Lake Michigan.

That's one more example of why environmentalists say unlined dumps must be emptied and any unrecycled ash contained in synthetically lined landfills. Recycling "wouldn't solve the coal ash issue ... but it would definitely make a dent in it," Blankenship said.