But the restaurant industry cautioned against extrapolating from the results how minimum wages would affect other cities, considering Seattle's booming tech sector and economy generally. 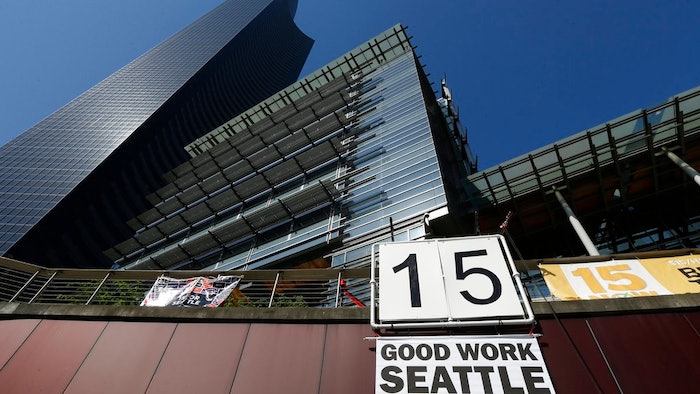 In this June 2, 2014, file photo, a sign that reads "15 Good Work Seattle" is displayed below Seattle City Hall, right, and the Columbia Center building, left, after the Seattle City Council passed a $15 minimum wage measure. A new study says Seattle's $15-an-hour minimum wage law has boosted pay for restaurant industry workers without costing jobs. The report, from the University of California at Berkeley, is certain to add to the debate as activists around the country push for increases in local, state and federal minimum wages.
AP Photo/Ted S. Warren, File

The report, from the University of California at Berkeley's Institute for Research on Labor and Employment, is certain to add to the debate as activists around the country push for increases in local, state and federal minimum wages.

The report is the first in a series of reviews in which the institute is examining jurisdictions that have raised their minimum wages.

It focused on food service jobs, which some critics said could be disproportionately affected if increased wages forced restaurants to cut workers' hours. Author Michael Reich said that hasn't been the case.

The results should give more confidence to other jurisdictions around the country that have adopted $15-an-hour laws, he said.

"We were surprised," Reich said Tuesday. "The results were so much clearer than is often the case."

Last year, University of Washington researchers found mixed results for the Seattle law, which phases in an increase to $15 an hour by 2021. They said the law appeared to have slightly reduced the employment rate of low-wage workers even as it boosted pay.

But the new research, based on data from the U.S. Bureau of Labor Statistics, determined that "employment effects" in restaurants "were not statistically distinguishable from zero."

Meanwhile, every 10 percent minimum wage increase in Seattle — up to $13, which is as high as Seattle's minimum went during the study period — increased wages nearly 1 percent in food services overall and 2.3 percent in limited-service restaurants, such as fast-food chains, the report said.

The pay increases weren't higher because many restaurant employees were already making more than minimum wage, and because many full-serve restaurants appeared to be taking advantage of a "tip credit" that allowed them to pay workers who are routinely tipped less than they otherwise would have, Reich said.

The restaurant industry cautioned against extrapolating from the results how minimum wages would affect other cities, considering Seattle's booming tech sector and economy generally.

"A study in one of the wealthiest cities in the U.S. does not reflect the impact drastic minimum wage increases could have across the country and should not be relied upon as this discussion continues - especially considering other studies have refuted these results," Leslie Shedd, vice president of the National Restaurant Association, said in an emailed statement.

"When we passed the $15 minimum wage, we were warned the economy would tank, jobs would dry up, and employers would flee," Murray said. "Today, Seattle's economy is the strongest it has ever been, unemployment is at a historically low rate, and employers are competing for employees."

Seattle's unemployment rate fell to 2.6 percent over the last two years, Murray said, and restaurants were among the city's fastest growing industries, with more than 33,000 workers in 2016.