The April PMI reading was weaker than economists expected, and was the lowest since December's, but it was still considered solid.

Paul Wiseman
FILE - In this Friday, Oct. 21, 2016, file photo, pellets from recycled plastic bottles is exposed to ultraviolet light as it is processed at the Repreve Bottle Processing Center, part of the Unifi textile company, in Yadkinville, N.C. On Monday, May 1, 2017, the Institute for Supply Management, a trade group of purchasing managers, issues its index of manufacturing activity for April.
AP Photo/Chuck Burton, File

WASHINGTON (AP) — American factories grew for the eighth straight month in April but at a slower pace than in March.

The Institute for Supply Management, a trade group of purchasing managers, said Monday that its manufacturing index slipped to 54.8 from 57.2 in March and 57.7 in February. The April reading was weaker than economists expected and was the lowest since December's 54.5. But it was still solid: Anything above 50 signals that manufacturing is growing.

Bradley Holcomb, chair of the ISM's manufacturing survey committee, noted that every monthly reading in 2017 has been higher than any reading in 2016. "We're still in very, very good shape," he said.

New orders and hiring grew more slowly in April, but production and export orders sped up.

American factories have bounced back after being hurt in early 2016 and late 2015 by cutbacks in the energy industry, a reaction to low oil prices, and a strong dollar, which makes U.S. products costlier in foreign markets.

The overall U.S. economy grew at annual pace of just 0.7 percent from January through March as consumer spending grew at the slowest pace in more than seven years, the Commerce Department reported last week.

But the American job market has remained healthy. Employers are adding 178,000 jobs a month so far this year, and the unemployment rate has fallen to 4.5 percent, lowest in a decade. Manufacturers have added jobs for four straight months. 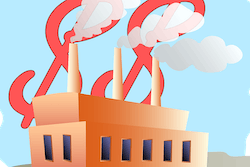