The explosion launched the van-sized boiler through the roof. 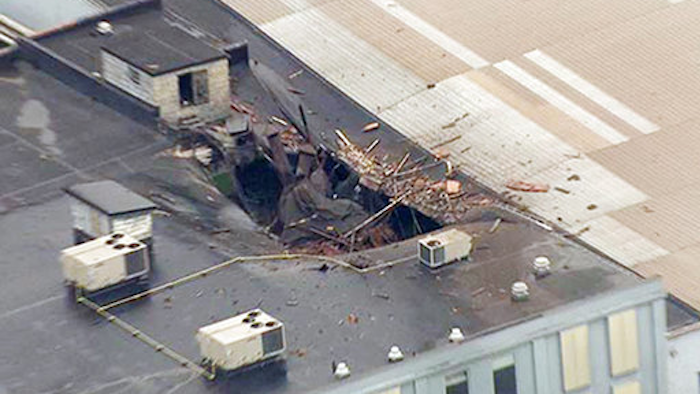 This Monday, April 3, 2017 photo from video by KMOV shows damage to the roof of a box company in St. Louis after a boiler exploded and flew before crashing through the roof of a nearby laundry business. Authorities said several people were killed as a result of the explosion.
KMOV via AP

KANSAS CITY, Mo. (AP) — An explosion launched a van-sized boiler through the roof a St. Louis box company and slammed much of it down onto a laundry business across the street on Monday, killing three people and injuring four others, authorities said.

One person died in the blast about 8 a.m. at the Loy-Lange Box Co. and two others were killed when a large piece of the boiler crashed into the nearby Faultless Healthcare Linen building's office area, Fire Chief Dennis Jenkerson said.

The explosion appears to have been an accident, but investigators were trying to pinpoint what caused the cast iron boiler — estimated to weigh a ton to a ton and a half — to explode, Jenkerson said. The blast occurred in a largely industrial area of south St. Louis.

Two injured victims were in critical condition, and one was undergoing surgery, Jenkerson said. The injured include a linen company worker who was found pinned beneath the boiler, which Jenkerson said was roughly 4 feet in diameter and 10 feet long (1.2 meters in diameter and 3 meters long). The boiler was used to produce steam to power the box company's equipment.

The boiler was still hot when rescuers arrived, the fire chief said, noting that the equipment traveled up to 500 feet (150 meters).

Though none of the victims' names has been released, Faultless Healthcare Linen's chief operating officer, Mark Spence, told the St. Louis Post-Dispatch the three victims there were new hires who were filling out paperwork when the boiler came crashing down on them, killing two and injuring the third.

"It's emotionally overwhelming just to think what these poor people experienced," Spence said.

A third building was damaged when a piece of pipe — about 8 feet (2.5 meters) long — linked to the explosion went through its roof, Jenkerson said. Other debris was found on the street.

Investigators will seek out and review the boiler's inspection and maintenance records, though "it appears just to be a commercial accident," Jenkerson said. Investigators from the U.S. Department of Labor's Occupational Safety and Health Administration were on the scene.

It wasn't immediately clear if anyone was working on the boiler at the time of the blast.

The phone rang unanswered at Loy-Lange Box Co., and an email message from The Associated Press to the company wasn't returned. The company is described on its website as a "full-service corrugator and custom box manufacturer."

OSHA's online records show that Loy-Lange was cited last year for a "general requirement" arising from holes in floors that prevented proper cleaning. The company paid a $3,741 fine, half of what OSHA initially assessed. The company also paid a $6,566 fine in 2015, and a $2,450 fine the year before that for what OSHA classified as "serious" violations.

In 2014, the company paid $2,450 of an initial $3,500 fine for improper energy control procedures, such as failing to properly train employees to ensure machinery was turned off and powered down and for not conducting annual energy control inspections. OSHA spokesman Scott Allen couldn't say if that violation had anything to do with the boiler.

And in 2015, the company paid $6,566 of a $9,380 fine for defective equipment, including a forklift without lights and damage to safety latches.

A spokeswoman for St. Louis' mayor said that although the city doesn't inspect boilers, it has strict licensure requirements governing operations of such equipment.

Maggie Crane said St. Louis requires any boiler-equipped business to have a city-licensed "stationary engineer" on staff whenever one is in use, with such licenses to be renewed each year. Such licensing often requires the applicant to be trained about boilers, then take a written and oral test, Crane said.

Loy-Lange had three engineers on staff with up-to-date licenses as of Monday, Crane said.

Spence, the Faultless Healthcare Linen executive, said in a statement that that company "immediately will be giving what practical help we can to our employees and their families.

"We are grateful to the firefighters and other emergency responders who have acted heroically in response to this tragic event," Spence said.