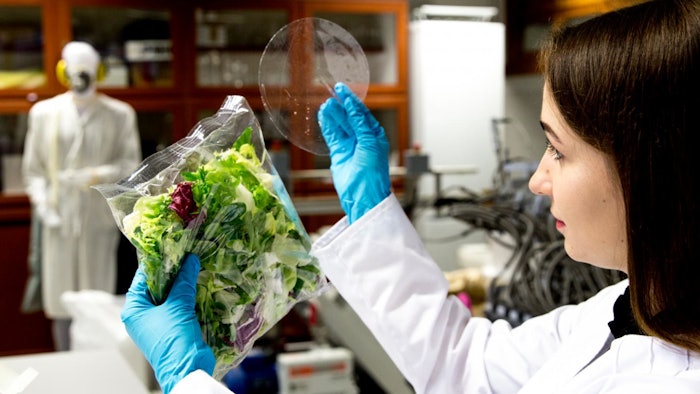 On average a European country citizen produces around 160 kilos of packaging waste; around 19 percent of which is plastic.

"Food packaging is mainly made from various plastics, which are being produced from non-renewable sources and are non-biodegradable. Also, it is not always possible to recycle them as leftovers from food amount to almost 50 percent of the packaging waste", says Paulius Pavelas Danilovas, researcher at Kaunas University of Technology (KTU) Department of Polymer Chemistry and Technology.

He recommends to change the attitude towards the food packaging, and to choose such packaging material, which would never become waste, but by naturally degrading could turn into fertilizer.

Headed by Danilovas, the team of researchers at the KTU Department of Polymer Chemistry and Technology are working on developing a technological solution for such a package - they investigate the possibility to create it from cellulose composites.

Also, by enriching the packaging material with active components, it can help maintain freshness of food for longer.

According to World Health Organization, more than 350 thousand of people die from food borne illnesses every year. 52 thousand of deaths are caused by salmonella, 37 thousand - by e. coli bacteria. 40 percent of food poisoning cases are children younger than 5 years old.

"Our goal was to create a biodegradable package, which could help to keep food fresh for longer, which could have anti-oxidizing or antimicrobial properties", says Danilovas.

Vesta Navikaite-Snipaitiene, chemical engineering PhD student at KTU and one of the research team members was responsible for testing the efficiency of various ethereal oils when added to the cellulose-based film.

"Active components of clove ethereal oil are very effective in tying free radicals; this oil proved efficient in enriching packaging with anti-oxidizing qualities. This effect helps to keep food fresh for longer, but such a package is not antimicrobial", says the researcher.

"To achieve antimicrobial effect, we added ionic silver particles to the cellulose based packaging. The results we achieved were quite unexpected - the silver particles made the packaging film more elastic and stronger", says Danilovas.

The film which is enriched with silver inhibits the growth of microorganisms and its antimicrobial properties remain active for long.

According to Danilovas, it is a great challenge to develop food packaging as for this thermal methods are always being used and cellulose does not have thermoplastic properties.

"We are excited to have found composites, which not only allow cellulose to turn into fluid condition, but also are not toxic, which is very important in all products related to food handling", says KTU researcher.

The modified cellulose packaging degrades in nature in around two years. The production of the packaging prototype was practically tested in a Lithuanian enterprise.

The commercialization of biodegradable active food packaging products, which could replace the non-recyclable plastics is in near future plans of the researchers.