Goodyear's Morphing Tire Doesn't Even Attach to Your Car

It's only connected with magnets. Also, a 3D printer that works like a spider and new rubber made out of eggshells and tomatoes.

A former student at Umeå University in Sweden has strung a 3D printer from the ceiling using fishing line, and he's currently 3D printing his own Tower of Babel much like a spider spins a web.

Torbjørn Ludvigsen took a RepRap 3D printer and created what he calls the Hangprinter. Using fishing line attached to the ceiling, and using three lateral anchored lines, Ludvigsen has created a low-cost 3D printer that is capable of printing larger objects than any commercially available large format printer, all with less than 1 mm resolution.

And what does he charge for such an innovation? Nothing. He gave it away for free, the open source specs are all available on GitHub and you can make your own for a little more than $200 in materials.

Ludvigsen started working on the Hangprinter as a student, when he was motivated to find a way to bring 3D printer production costs down. He figured that the enclosure accounted for almost half of the cost of the 3D printer, so he decided to lose it.

While it doesn't appear as though the tower will reach the heavens anytime soon, unless he finds an endless supply of materials and fishing line, the structure is already more than 12 feet (3.668 m) tall, and he plans on printing for another full day at Sliperiet, Umeå Arts Campus where the installation is part of the +Project innovation initiative.

You can find more information, or help sponsor Ludvigsen's continued efforts on Bountysource.com. The design is still early in the design process and working out some bugs, but it could prove to be a really cheap way to print really big.

Farm-to-table is a social movement that tries to include more locally sourced, organic foods on the family dinner table. What if we solved another sustainability issue with the much less catchy slogan, farm-to-tire?

Ohio State University researchers have found a way to take the petroleum-based filler used in manufacturing tires and replace it with food waste, which could solve three problems:

Katrina Cornish has spent years looking for new domestic rubber sources; she even made rubber out of dandelions. Her new patent-pending method takes eggshells and tomato peels and replaces carbon black, which makes up about 30% of your typical tire.

Why eggs and tomatoes? She wants the shells and skins. Americans consume about 100 billion eggs each year. Half of them are broken in commercial food factories, and thrown away. Americans also eat 13 million tons of tomatoes per year, most of them canned or processed, but commercial tomatoes have thick skins that are also tossed when making processed products.

The new rubber made with the farm-to-tire fillers has exceeded industrial standards for performance, particularly strength while maintaining flexibility, which could open up new applications for rubber.

Cars Will Hover Over Goodyear’s Morphing Tire of the Future

The Eagle 360 Urban concept tire tread would be 3D printed based on the driver's tendencies and location. Connected to the car using magnetic levitation, which means they are only connected to your car via magnetic fields, the tires will also have a 'brain' or artificial intelligence that will sense the road condition to morph the tire tread and interact with other vehicles.

Instead of the standard sensors, the Eagle 360 Urban envisions a tire that has a bionic skin with a built-in sensor network that not only captures road and weather conditions to communicate with the tires' autonomously morphing tread, but also has a self-healing capability that can measure and predict future tire wear to allow automated tire management, and enable predictive and proactive maintenance.

The morphing tread has a touch of biomimicry with features including a sponge-like groove design that softens to create deeper grooves when you’re driving on wet roads.

The company says that the unattached sphere design will not only improve maneuverability, because it can move in any direction, but it will also cater to needs of autonomous cars. 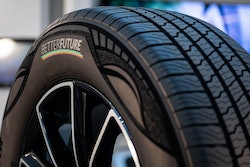 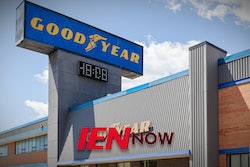 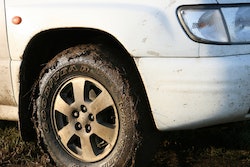