Nissan denied that the company is improperly pressuring workers. 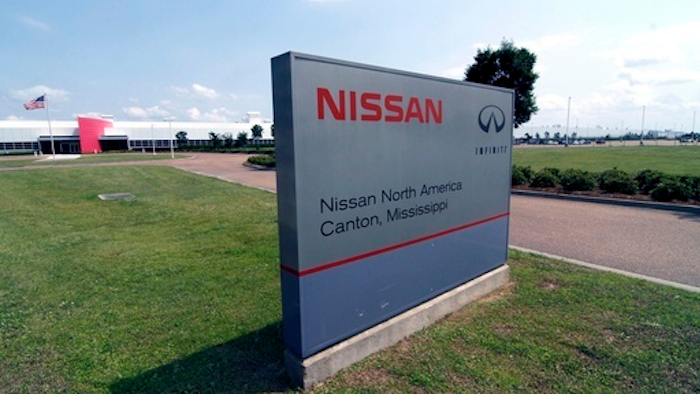 FILE - This sign photographed April 20, 2011, proclaims the location of the Nissan auto manufacturing facility in Canton, Miss. The United Auto Workers union charges Friday, March 3, 2017, that Nissan Motor Co. broke federal labor law hours less than two days before a Saturday rally in Mississippi where U.S. Sen. Bernie Sanders and others plan to speak in favor of unionization. The UAW says that on Thursday, a company security guard wrongfully stopped workers from handing out literature and asking fellow employees to authorize a union vote outside a gate of the Canton plant.
AP Photo/Rogelio V. Solis, File

The UAW said a company security guard wrongfully stopped workers from handing out literature and asking fellow employees to sign cards authorizing a union vote outside a gate of the Canton plant Thursday afternoon.

A union lawyer emailed an unfair labor practice charge to the National Labor Relations Board late Thursday. It's one of several now pending over the union's yearslong campaign to represent some or all of the 6,400 people who work at the complex.

Sanders, a Vermont independent, told The Associated Press in a phone interview Friday that pro-union workers are fighting an uphill battle against an unfairly hostile company.

"I think the workers in the Nissan plant in Mississippi have shown an enormous amount of courage," the former candidate for the 2016 Democratic presidential nomination said. "When people stand up and fight for their rights, it's important to stand with them."

Federal law says workers can talk about a union on a company's property, as long as they do it before or after work or during breaks, and in non-work areas such as parking lots or break rooms.

"Nissan abides by U.S. labor law and respects the employees' rights to choose if and how they wish to be represented," Bajaj wrote in an email.

Nissan spokesman Brian Brockman denied that the company is improperly pressuring workers, although he acknowledges that the company talks to workers about the UAW. A plantwide video recorded last year by a union supporter shows a top manager saying the company doesn't believe UAW representation is in Nissan's best interests.

"If he's saying we're intimidating workers or not telling them they don't have a vote, that's simply not the case," Brockman said.

Sanders, though, said it can be "extremely difficult" for workers to form unions.

"In the United States of America, people should be free to vote for a union or against a union without harassment, without threats, without fear of what might happen to them," he said.

Sanders said he was attracted to the Mississippi effort in part because he believes unions could bargain for better pay and benefits, neutralizing threats by companies in higher-wage states to move south.

"If we can raise wages in Mississippi and Alabama and some of the other low wage states in the South, we will benefit workers all across the country," he said.

The UAW has long struggled to unionize foreign-owned auto plants across the South. It has lost two votes at Nissan's plant in Smyrna, Tennessee, and no vote has ever been held in Canton.

NAACP President Cornell William Brooks and actor Danny Glover also are scheduled to speak at the rally organized by the pro-union Mississippi Alliance for Fairness at Nissan. The alliance seeks to link support for the union with civil rights for African-Americans.

After the rally, Sanders and others are scheduled to march to the plant to present a letter to the company. An advance copy provided to the AP shows they will demand that Nissan "cease intimidation and threats" against pro-union employees, discuss a neutrality agreement with the UAW ensuring employees can vote on a union "in a free and fair election" and improve training and safety.

"This is certainly the union's right to come here and try to organize, but it is also the employer's right to not invite the union in," said Wilson, whose group is the state chamber of commerce.