According to Boeing, nearly 74 percent of the more than 2,800 votes cast were against representation by the International Association of Machinists and Aerospace Workers. 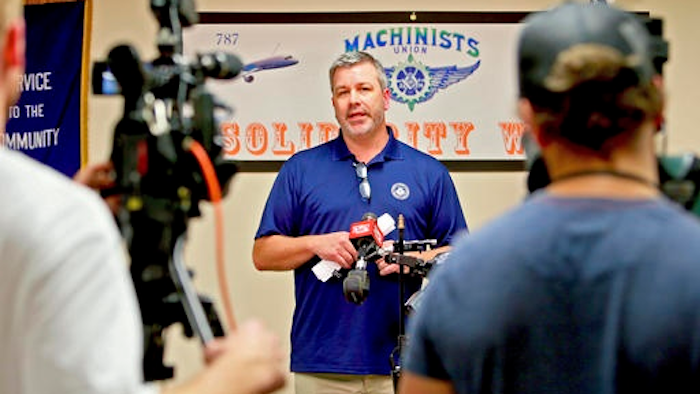 COLUMBIA, S.C. (AP) — Production workers at Boeing's South Carolina plant have overwhelmingly rejected an effort to unionize, maintaining Southern reluctance toward unionization and setting up a picture-perfect stop for President Donald Trump, who visits the facilities this week.

According to Boeing, nearly 74 percent of the more than 2,800 votes cast were against representation by the International Association of Machinists and Aerospace Workers.

In a news release Wednesday night, Lead Machinist organizer Mike Evans said it's "the workers who dictate what happens next." National Labor Relations Board rules require workers wait a year before another union vote.

Wednesday's balloting came just two days before Trump was slated to make the first visit by a sitting president to the sprawling North Charleston complex, where Boeing makes the 787 Dreamliner. On Friday, Trump is coming to town for the rollout of the first 787-10 model.

The presidential visit marks a photo finish for Boeing, which for weeks vigorously campaigned against the Machinists' effort. Billboards, radio and television ads blanketed the Charleston area, arguing to employees why they should not surrender their rights to the union.

In its campaign, Boeing didn't threaten to move its operations abroad if workers unionized — a tactic that often surfaces when collective bargaining efforts arise — perhaps abstaining from those threats because of its huge South Carolina plant investment and billions of dollars in federal defense contracts the company does not want to risk.

Trump himself engaged with the company during the presidential campaign, blasting Boeing for the cost of building a new Air Force One. "Costs are out of control," Trump tweeted in early December. "Cancel order!" Boeing CEO Dennis Muilenburg met with Trump two weeks later.

If successful, the balloting on whether employees should join the union would have sent a significant message to politicians in the region and Washington that workers here want the same protections and benefits as those in other areas. And, to leaders trying to recruit businesses by promoting their states' lack of union presence, it'd it would have made their jobs more difficult.

But this most recent test of Southern acceptance of collective bargaining movements was an uphill battle for the union and its backers. The global aviation giant, which came to South Carolina in part because of the state's minuscule union presence, did so with the aid of millions of dollars in state assistance made possible by officials who spoke out frequently and glowingly with anti-union messages.

"It is an economic development tool," Gov. Nikki Haley, now President Donald Trump's ambassador to the United Nations, said in a 2012 address of how she sold companies on coming to the state. "We'll make the unions understand full well that they are not needed, not wanted and not welcome in the state of South Carolina."

At least that part of the tactic has worked. Only about 52,000 South Carolina workers have union representation, according to the U.S. Bureau of Labor Statistics' 2016 figures. Other major manufacturers in the state, including BMW and Michelin, aren't unionized or haven't experienced major campaigns to do so. The Machinists initially petitioned for a vote at Boeing in 2015 but withdrew the request because of what the union called a toxic atmosphere and political interference.

Another facet of union opposition in this heavily Republican state is political, given the longstanding relationship between organized labor and Democratic politics. Any lenience toward unions could be seen as giving Democrats a toehold in the state.

Southern states for decades have recruited manufacturers by promising freedom from the influences of labor unions, which except for some textile mills have been historically rejected by workers as collective action culturally foreign to a South built around family farms, said Jeffrey Hirsch, a law professor who specializes in labor relations at the University of North Carolina at Chapel Hill.

Asked earlier Wednesday about the vote, South Carolina Gov. Henry McMaster said he didn't feel unions were needed in the state, where Boeing and other companies have been successful, and where, he feels, workers are generally happy.

"I think we're doing just fine without a union presence," he said.

In a statement, Boeing vice president and general manager Joan Robinson-Berry was already looking toward Trump's visit, the first by a sitting president to the company's North Charleston facilities.

"It is great to have this vote behind us as we come together to celebrate that event," she said.