But the biggest impact to Ford's lower net income was due to a $3 billion noncash adjustment of pension obligations. 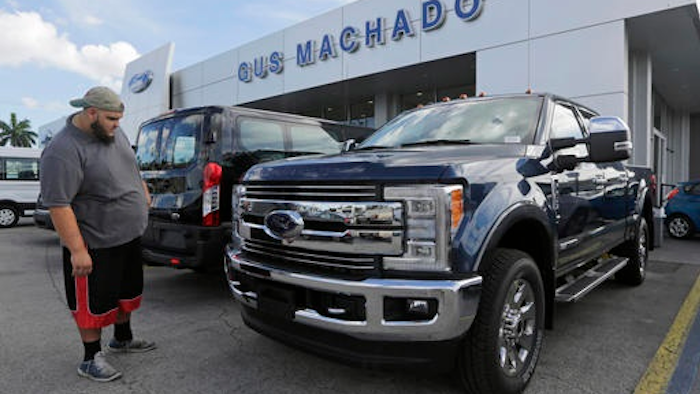 The company on Thursday posted $4.6 billion in net income, down nearly $2.8 billion from a year earlier. But Ford said its pretax profit for the year hit $10.4 billion, the second-best ever, while revenue rose slightly to $151.8 billion.

Ford's 56,000 U.S. hourly workers will reap the benefits. They'll get average profit-sharing checks of $9,000 based on a pretax North American profit of just over $9 billion.

But with slowing sales expected in the U.S., Ford's most lucrative market, and big investments in electric and autonomous vehicles, the company said it expects 2017 profits to be strong but lower than last year.

For the fourth quarter, the Dearborn, Michigan, automaker posted a $783 million net loss compared with a $1.9 billion profit a year ago.

The loss was due largely to a $3 billion noncash adjustment of pension obligations and a $200 million charge for halting construction of the Mexican factory. That was announced earlier this month amid criticism from President Donald Trump that Ford was shifting production of the compact Focus to Mexico.

Ford canceled construction of the Focus plant in the fourth quarter, but still intends to make the cars in Mexico at an existing plant. The company says no jobs will be lost due to the move because the current Focus plant near Detroit will build new a new small pickup and SUV. Contingency

Chief Financial Officer Bob Shanks said the company is still trying to gauge the impact that President Donald Trump and has taken no actions "since there is no specific policy." Ford expects pro-growth policies and a possible corporate tax cut. "It's something we're going to have to watch closely and respond appropriately when specific policies are formulated," Shanks said.

For the fourth quarter, Ford said it lost 20 cents per share, but excluding special items, made a 30-cent profit. That fell just shy of Wall Street estimates. Analysts polled by FactSet expected 31 cents per share.

The fourth-quarter net loss was Ford's first quarterly red ink since the fourth quarter of 2014.

For the year, Ford's North American pretax profit fell by $344 million compared with 2015, when it booked earnings from increased production of new heavy-duty pickup trucks and a refurbished Ford Fusion sedan, Chief Financial Officer Bob Shanks said. In Europe, the company made a record $1.2 billion, up $946 million from a year earlier. Its Asia Pacific unit reported a $627 million profit, down $138 million from a year ago. Ford still lost money in South America and the Middle East/Africa.

Ford's U.S. sales fell 0.1 percent last year as car sales dropped and truck and SUVs rose. Since trucks and SUVs cost more, the company said its average retail price per vehicle rose by $1,400 in the fourth quarter. Shanks said Ford also benefited from customers buying vehicles with more options. "That was a really big factor in our profitability across the board this year particularly in North America, Europe and Asia Pacific," he said.