Pay Gap Between College Grads and Everyone Else at a Record

Since the Great Recession ended, college-educated workers have captured most of the new jobs and enjoyed pay gains. 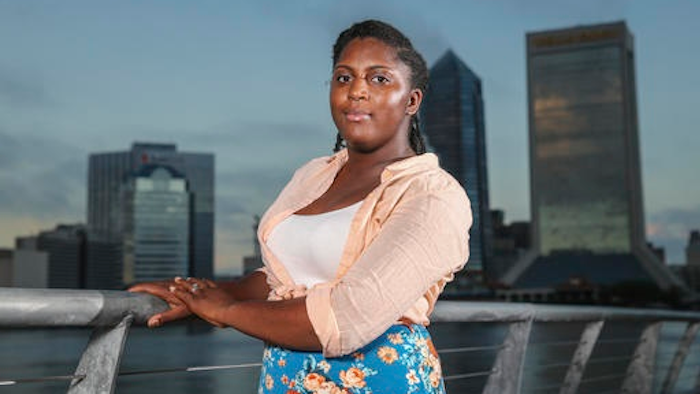 Asia Howard poses for a photo at St. Johns River Park at sunrise, in Jacksonville, Fla. Howard was stuck in mostly retail and fast-food jobs after graduating high school, unable to get a job in banking, a profession she prized for its steady hours. After further developing her career and computer skills, she landed a job in mortgage lending that paid nearly double what she earned in previous jobs.
AP Photo/Gary McCullough

WASHINGTON (AP) — Americans with no more than a high school degree have fallen so far behind college graduates in their economic lives that the earnings gap between college grads and everyone else has reached its widest point on record.

The growing disparity has become a source of frustration for millions of Americans worried that they — and their children — are losing economic ground.

College graduates, on average, earned 56 percent more than high school grads in 2015, according to data compiled by the Economic Policy Institute. That was up from 51 percent in 1999 and is the largest such gap in EPI's figures dating to 1973.

Since the Great Recession ended in 2009, college-educated workers have captured most of the new jobs and enjoyed pay gains. Non-college grads, by contrast, have faced dwindling job opportunities and an overall 3 percent decline in income, EPI's data shows.

"The post-Great Recession economy has divided the country along a fault line demarcated by college education," Anthony Carnevale, director of Georgetown University's Center on Education and the Workforce, said in a report last year.

College grads have long enjoyed economic advantages over Americans with less education. But as the disparity widens, it is doing so in ways that go beyond income, from homeownership to marriage to retirement. Education has become a dividing line that affects how Americans vote, the likelihood that they will own a home and their geographic mobility.

Behind the trend is a greater demand for educated workers, and the retirement of older Americans, who are more likely to be high school-only graduates.

The split is especially stark among white men. For middle-age white men with only high school degrees — the core of President-elect Donald Trump's support — inflation-adjusted income fell 9 percent from 1996 through 2014, according to Sentier Research, an analytics firm. By contrast, income for white men in the same age bracket who are college graduates jumped 23 percent.

Long after the recession ended, many young college graduates struggled to find well-paying jobs in a slowly recovering economy, and stories about graduates working as coffee shop baristas abounded. But data collected by the New York Federal Reserve suggests that trend has faded as the economy has improved.

Yet few experts think the solution is simply to send more students to four-year colleges. Many young people either don't want to spend more years in school or aren't prepared to do so. Already, four in every 10 college students drop out before graduating — often with debt loads they will struggle to repay without a degree.

Rather, labor economists say, many high school grads would benefit from a more comprehensive approach to obtaining skills, especially involving technology, that are increasingly in demand.

"If the only path you offer them is a traditional college path, they're not going to be successful," says Harry Holzer, an economist at Georgetown University.

Helping lift high school graduates' skill levels is critical, given the many ways they are lagging behind their college-educated peers:

— They're less likely to have a job. Just two-thirds of high school-only grads ages 25 through 64 were employed in 2015, down sharply from 73 percent in 2007. For college graduates in the same age group, employment dipped only slightly from 84 percent to 83 percent.

— Less likely to be married. In 2008, marriage rates for college-educated 30-year olds surpassed those of high-school-only grads for the first time. And women with college diplomas enjoy an 8-in-10 chance of their first marriage lasting 20 years, according to the Center for Disease Control's National Center for Health Statistics. That's double the odds for women with just high school degrees.

— Union membership. A college-educated worker is now more likely to belong to a labor union than a high-school-only worker is, according to Pew Research Center. Unions have played a key role in raising pay for members. Yet just 6 percent of workers with only a high school degree now belong to one. Public employee unions, which often represent teachers and others with college educations, have generally maintained staying power while large industrial unions have deteriorated.

— Retirement savings. College grads are more likely than high school-only graduates to contribute to a 401(k)-style retirement plan , according to research by Christopher Tamborini of the Social Security Administration and Changhwan Kim, a sociology professor at the University of Kansas. College grads contributed 26 percent more even when members of both groups had similar incomes and access to such plans, their research found.

Participation in 401(k)-style plans requires decisions — whether and how much to contribute and how to invest — that can become barriers for the less educated. That contrasts with traditional pensions, which automatically enrolled everyone eligible and provided defined benefits. But traditional pensions have been rapidly phased out.

— Mobility. College graduates are more likely to move to find work than high-school-only workers are, says Enrico Moretti, an economist at the University of California, Berkeley. Companies tend to recruit more broadly for high-skilled jobs than for low-skilled work.

All of this contributed to a sharp political split in the presidential election. College graduates favored Hillary Clinton by 9 percentage points. Non-college grads chose Donald Trump by 8 points, according to exit polls. That was the largest disparity between the two groups on record since 1980, according to the Pew Research Center.

"These are some of the largest (demographic) shifts in recent years," said Jocelyn Kiley, an associate director at Pew.

The gap is most pronounced among whites: Nearly two-thirds of white non-college grads voted for Trump, compared with just 45 percent of whites with college degrees.

Some of these trends might eventually reverse themselves if more high school grads acquire the skills needed for higher-paying work. Though many middle-income jobs don't require college, nearly all require some post-high school education or training.

What Holzer calls the "new middle" includes such health care jobs as X-ray technicians and phlebotomists, as well as computer-controlled manufacturing and some office occupations, like paralegals.

A typical X-ray technician, for example, earns nearly $60,000 a year and needs only a two-year degree, according to government data.

And these "new middle" positions are typically the same jobs for which employers have complained that they can't find enough qualified people to fill. Labor experts say the U.S. educational system is failing to help young people acquire such skills.

If they know where to look, high school graduates can choose from among numerous options for vocational skills training — from two-year programs to online courses to for-profit schools. Yet many aren't likely to get much help from high school guidance counselors.

Joseph Fuller, a professor at Harvard Business School, says counselors increasingly focus on things like substance abuse, discipline, and standardized testing, rather than on career advice.

Nor do U.S. high schools funnel students into the kind of on-the-job apprenticeships that exist in some countries. Instead, Fuller says, U.S. apprentices are typically older workers upgrading their skills in areas like construction. The average age of an apprentice in Germany is 17, he notes; in the United States, it's 27.

"We have a very limited vision of how to get people from their graduation in high school onto a path that's going to lead them to have a successful, independent life," Fuller said.

Asia Howard, 26, of Jacksonville, Florida, is navigating that path right now. She was stuck in mostly retail and fast-food jobs after graduating high school, unable to get a job in banking, a profession she prized for its steady hours. A friend told her about a nonprofit called Year Up, which teaches such career skills as resume writing, interview techniques and time management.

Year Up participants also typically receive internships, which Howard spent at Everbank. She also took classes to upgrade her computer skills. Early last year, she began a job in mortgage lending at PNC Financial that pays nearly twice what she earned in previous jobs. She saw many people lose homes during the financial crisis. Now, she helps people buy them.

"It gives me a chance to see what that side of life is like," Howard said. And unlike in her previous jobs, "I can see a lot of room to grow." She is also studying for an associate's degree in business administration at Florida State College at Jacksonville.

The driving force for many of these changes was the recession, which reshaped the job market in ways that left far fewer opportunities for workers like Howard. Many routine jobs were replaced by computers or robots or were outsourced overseas.

There are nearly 1.5 million fewer office administrative and clerical jobs now than there were before the recession, according to an analysis by Georgetown's Center on Education and the Workforce. That narrowed a long-time path to the middle class for high school graduates, particularly women.

Manufacturing employment is also 1.5 million lower than when the recession began in 2007. The construction industry had offered a lifeline to many high-school educated workers, particularly men, during the housing boom in the 2000s. Yet construction now employs 840,000 fewer people than it did nine years ago.

Since the recession, the fastest-growing industry for high school-only grads has been a mostly low-paying sector that includes restaurants, hotels, and amusement parks, according to Georgetown's analysis.

Those are the types of jobs that Crystal Thompson, 35, of Seattle, has held since she finished high school. She has worked at Domino's Pizza for seven years.

"The only jobs that are out there are pretty much minimum wage jobs — coffee shops, restaurants, things like that," she said. "I'm pretty much stuck in fast food for now."

Her raises have come from minimum wage increases. She went on strike twice during Seattle's recent "Fight for $15" campaign, which led the City Council to approve a citywide $15 minimum wage.

Thompson, who has three children, wants to return to school to become a translator. She is mostly fluent in Spanish. Yet she has found it hard to do so in part because her work schedule can fluctuate and is typically distributed just a day in advance.

"It's definitely one of my goals, to get some kind of career going," she says. "I want to be a productive member of society."