35% of college graduates described themselves as working or lower class, up from just 20% who felt that way in 1983. 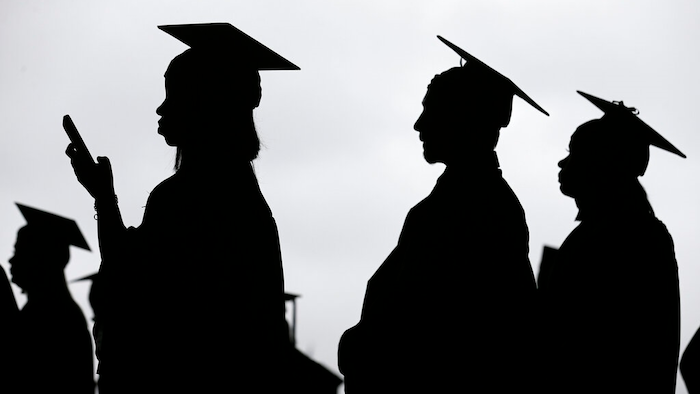 In this May 17, 2018, file photo, new graduates line up before the start of the Bergen Community College commencement at MetLife Stadium in East Rutherford, N.J. A college degree has long been a ticket to the U.S. middle class. Yet a new survey shows that college graduates aren’t as likely as they once were to feel they belong to the middle class.
AP Photo/Seth Wenig, File

WASHINGTON (AP) — A college degree has long been a ticket to the U.S. middle class.

It typically confers higher pay, stronger job security, greater home ownership and comparatively stable households. Those benefits have long been seen as worth the sacrifices often required, from deferred income to student debt.

Yet college graduates aren't as likely as they once were to feel they belong to the middle class, according to a collaborative analysis of the 2018 General Social Survey by The Associated Press-NORC Center for Public Affairs Research and GSS staff. The survey found that 35% of graduates described themselves as working or lower class, up from just 20% who felt that way in 1983. By contrast, only 64% of college grads say they feel they belong to the middle or upper class.

The findings might seem surprising given that the nearly decade-long U.S. economic expansion is on the verge of becoming the longest on record and unemployment is an ultra-low 3.8 percent. Yet the financial insecurities that afflict many college graduates point to the widening gap between the richest Americans and everyone else. Dan Black, an economist at the University of Chicago, suggested that the consequences of the trend could include delayed family formation, lower levels of consumer spending and, eventually, slower economic growth.

"Concerns like this will definitely have impacts for the economy, Black said.

The survey shows that Americans — both college graduates and those without degrees — have broadly benefited as the country healed from the Great Recession, which ended in 2009. But across age groups, a college degree has become less of an assurance of upward mobility. College graduates ages 50 and over, as well as those under 35, are less likely than they were in 1993 to describe themselves as middle or upper class.

Not surprisingly, Americans without a college degree have long felt even less connected to the middle class. Last year, six in 10 of them described themselves as working or lower class, about the same as the proportion who said so in 1983. (The survey didn't define middle class; respondents replied based on their own perceptions.)

All of which suggests that while college still offers a path upward, that route has been narrowed by student debt loads, an outpacing of home prices relative to wages and widening economic inequality.

The income disparities go well beyond the gap between the top 1% of earners and all other households. Disparities are widening even within many occupations, including financial advisers, lawyers and physicians. The result is that an ostensibly middle class job title may provide a pay level more associated with a lower middle class job.

The survey finds that Americans' satisfaction with their personal finances has finally regained its pre-recession levels even though this hasn't led to increased identification with the middle class. Both people who have graduated from college and those who haven't are now as likely as they were before the recession to say their financial situations have improved in the past year.

But Americans are also more likely than they were before the recession to say they feel overworked. College graduates are likelier than those without degrees to say they work overtime (80% to 70 and that they have more work to do than they can complete (40% to 30%).

Among college graduates who feel untethered from the middle class is Justin Provo of Chicago. At age 28, Provo says student debt has inhibited his path to the middle class. He borrowed a total of $58,000 to graduate in 2017 from Roosevelt University with a degree in economics and philosophy.

Now a portfolio manager for a mortgage servicing company, he says his income-based loan repayment plan isn't enough to fully cover the interest on his loans. So his debt load keeps rising even though Provo is making his regular loan payments. Just last week, he received a real estate license in hopes of earning extra income to reduce his debts.

"I'm chipping at marble with a spoon," Provo said. "I'm making some progress, but I don't feel like I'm getting anywhere."

All told, student debt totals roughly $1.5 trillion — a more than five-fold increase since 2004, according to the Federal Reserve Bank of New York. To help manage the burden, many parents and older family members have borrowed to fund their children's educations.

Fed researchers concluded that the increase in education debt between 2005 and 2014 has prevented home ownership for roughly 400,000 young people. At the same time, many surveys show that student debt has also delayed marriages and household formation. The problem has emerged as an issue for the 2020 presidential election, with multiple Democratic candidates — most prominently Sen. Elizabeth Warren — calling for some form of student debt forgiveness.

Economists have noted that rising college debt has in effect become an entry fee for the job market. Nearly 80% of the net 2 million job gains last year went to college graduates, even though just a third of adults hold a degree. But roughly 60% of college graduates in 2017 had student loans, with the average borrower leaving college with about $30,000 in debt, according to the College Board.

"Young people are facing unprecedented challenges that are preventing them from achieving what we all consider to be the American Dream," said Soncia Coleman, a senior director at Young Invincibles, an advocacy group for millennials. "They need the education, but the cost to get it is astronomical."

What's more, disparities in pay have widened within individual job categories over the past decade, according to an analysis by Martha Gimbel, research director at Indeed.com, the jobs site. Using data from the Bureau of Labor Statistics, Gimbel studied the gap between what the top 10% of a profession earned compared with the bottom 10%.

Gimbel found that the most unequal incomes now exist among financial services sales agents, medical doctors and real estate agents. Education, race, gender and age were relatively minor factors in the worsening wage equality within occupations. Among the more influential factors were the likelihood that workers are paid with bonuses, a concentration of high pay among superstar performers and unequal profits among employers. A computer programmer at Apple, for example, would be paid substantially more than a programmer for a much smaller or less profitable employer.

The top 10% of America's lawyers earned more than $208,000 last year, which makes the profession look extremely lucrative. But the bottom 10% earned less than $58,200, an income that could make it difficult to repay law school debt

"People might seek to become a lawyer, doctor or financial adviser because they see big salaries," Gimbel said. "But there is a lot of range in what those workers make. They need to remember that they could be one of the unsuccessful lawyers or real estate brokers."

The General Social Survey has been conducted since 1972 by NORC at the University of Chicago, primarily using in-person interviewing.

The most recent survey was conducted April 12 through Nov. 10, 2018, and includes interviews with 2,348 American adults. Results for the full sample have a margin of error of plus or minus 3.1 percentage points.

Colleges Want a Cut of Your Salary