It costs less than the average new vehicle, but can it help shift America from gasoline to electricity when we're paying $2 per gallon? 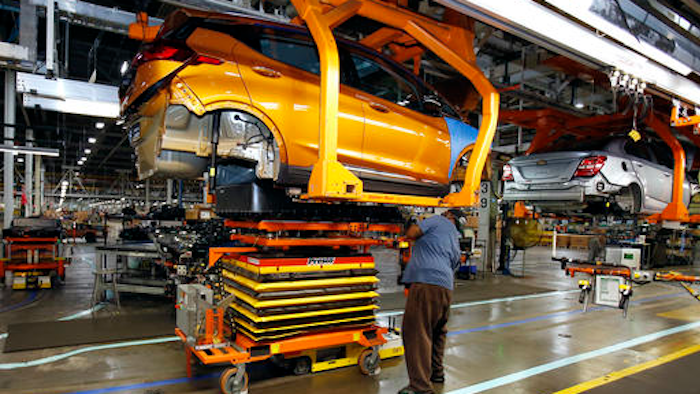 A battery is lifted into place for installation in the Chevrolet Bolt EV at the General Motors Orion Assembly plant Friday, Nov. 4, 2016, in Orion Township, Mich. The Chevrolet Bolt can go more than 200 miles on battery power and will cost less than the average new vehicle in the U.S. But it's unclear whether the car can do much to shift America from gasoline to electricity in an era of $2 prices at the pump.
AP Photo/Duane Burleson

ORION TOWNSHIP, Michigan (AP) — It can go more than 200 miles on battery power and it costs less than the average new vehicle in the U.S. But in an era of $2 per gallon gasoline, the Chevrolet Bolt probably won't do a whole lot to shift America from gasoline to electricity.

General Motors has started making Bolt hatchbacks on a slow assembly line at a factory in Orion Township, Michigan, north of Detroit.

The cars, starting at $37,495 before a $7,500 federal tax credit, will go on sale in California and Oregon before the end of the year, and will spread to the rest of the country next year. The average sales price of a new vehicle in the U.S. is about $34,000, according to Kelley Blue Book.

Analysts say the Bolt's 238-mile range on a single charge, plus a net price of around $30,000, should make it an attractive alternative to cars with internal-combustion engines. While they expect the Bolt to incrementally add to the number of electric cars now on the road, they don't expect a seismic shift to electricity yet.

The Bolt's range more than covers the average daily round-trip commute of about 40 miles in the U.S., and that should give comfort to those who fear running out of power, said Stephanie Brinley, an auto industry analyst for IHS Markit. But there's always the late night at work and the early meeting the next morning without enough charging time, or the night you forget to plug the car in. Those are tough adjustments for Americans, she said.

"We're trained to believe that wherever we go, we get can get the fuel that we need. With electricity you need to plan that out a little bit more," Brinley said.

GM, he said, set out to make the range about equal to a half-tank of fuel in a gas-powered car. With a half-tank of gas, most people don't worry that they have to refuel for a while and are comfortable driving, he said.

In a quick drive Friday on roads near GM's technical center north of Detroit, the car accelerated quickly when compared to a gas car. GM says it goes from zero to 60 mph in about 6.5 seconds, which is faster than many muscle cars from the '70s and '80s. The handling was tight with very little body roll, yet the ride was smooth and quiet.

GM beat rival Tesla to market with a long-range affordable electric car by at least a year. Tesla plans to start delivering its 200-mile, $35,000 (before tax credits) Model 3 in the second half of next year, and it had 373,000 deposits as of May.

The carmaker hasn't revealed exactly when the first customer will get a Bolt. Chevrolet didn't take advance reservations but says there's been strong interest at its dealerships.

Not all of GM's 3,000 dealers nationwide will be certified to sell and service the Bolt, although the company isn't sure how many yet. Around 2,000 can service the Bolt's plug-in cousin, the Volt.

GM says that should be a big advantage over Tesla, which doesn't have service centers in every state.