The $2.1 billion double-decker highway within the tunnel was supposed to open late last year, but the machine broke down. 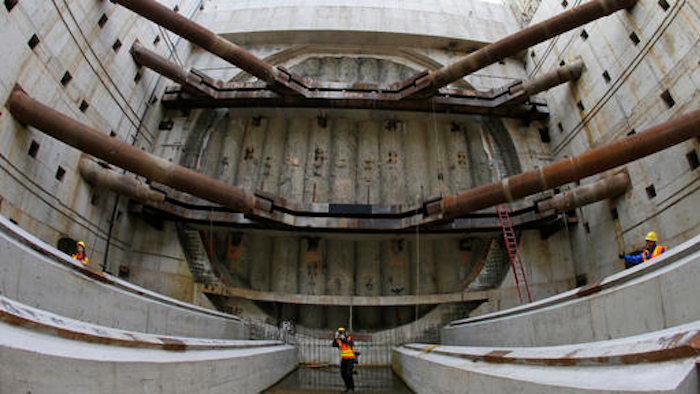 In this photo made with a fish-eye lens, reporters and photographers stand in the pit where a tunnel boring machine known as "Bertha" will emerge when the nearly 2-mile tunnel of the Highway 99 project to replace the earthquake-damaged Alaskan Way Viaduct is completed during a media tour, Monday, Oct. 3, 2016, in Seattle. Officials said Monday that the machine had passed the halfway mark as it digs beneath the city.
AP Photo/Ted S. Warren

The drill known as Bertha churned past the downtown Pike Place Market on its path to creating the nearly 2-mile tunnel of the Highway 99 project.

The $2.1 billion double-decker highway within the tunnel was supposed to open late last year, but the machine broke down and the project encountered other problems.

Officials estimate the four-lane tunnel will be completed by late 2018 and would open to traffic in early 2019 after crews connect the tunnel to existing roadways. Several of the ramps and roadways into and out of the tunnel are already in place, the Washington Department of Transportation said.

The contractor, Seattle Tunnel Partners, had dug up more than 4,635 feet of the tunnel by Monday morning, and crews will bore for a short time more before stopping for a month of planned maintenance.

"Bertha has been steadily on the move and made her way to the second half of the tunnel," Gov. Jay Inslee said in a statement.

Building a tunnel under Seattle was the preferred choice to replace the Alaskan Way Viaduct, which was damaged in a 2001 earthquake. The viaduct carries about 100,000 vehicles along Seattle's waterfront each day.

In January, Inslee halted all digging until the contractor determined what caused a large sinkhole to form over the area where the machine was operating. The project was suspended for six weeks, which Seattle Tunnel Partners project manager Chris Dixon has said was unjustified.

"Everyone on the team is working toward the day when the machine comes out the other side," state transportation Secretary Roger Millar said in a statement.