British farmers may soon be unable to find workers, because of the U.K.'s vote to leave the European Union. 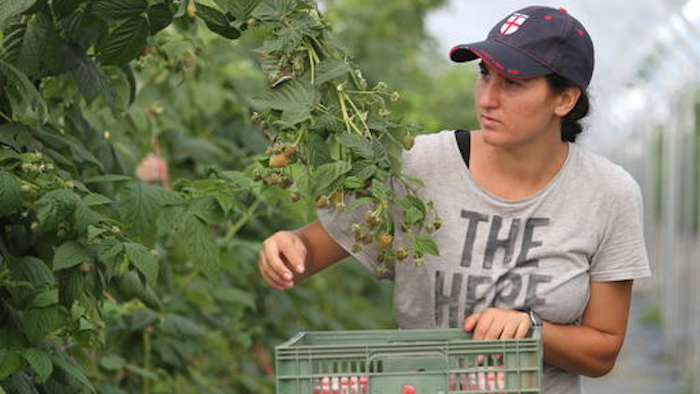 In this photo taken on Wednesday, Aug. 24, 2016, a worker picks raspberries in a fruit field at Boxford Suffolk Farms, in Suffolk, England. British fruit and vegetable growers rely on seasonal workers from other EU countries to harvest their crops because local workers no longer want the poorly paid, physically demanding jobs that offer little security. EU citizens have the automatic right to work in any member state, and low-skilled east European laborers have helped fuel Britain’s economy since their countries joined the bloc in 2004.
AP Photo/Leonora Beck

LONDON (AP) — Ismigyul Ismetova wraps her muddy fingers around a plump raspberry, plucks it from the stalk and drops the fruit into a tray in a field in Suffolk, deftly completing a task that is too delicate for a machine.

While her work may be low-skilled, it's an essential link in the harvest of berries. There's just one problem: British farmers may soon be unable to find workers like the 25-year-old Bulgarian because of the U.K.'s vote to leave the European Union.

British fruit and vegetable growers rely on seasonal workers from other EU countries to harvest their crops because local workers no longer want the poorly paid, physically demanding jobs that offer little security. EU citizens have the automatic right to work in any member state, and low-skilled east European laborers have helped fuel Britain's economy since their countries joined the bloc in 2004. That labor supply is under threat after concerns about immigration drove the campaign to leave the EU.

"U.K. farmers have potentially the most to lose from Brexit of any other sector in the U.K.," said Emily Lydate of the U.K. Trade Policy Observatory at the University of Sussex. "And one of the reasons for that is their reliance on EU labor."

Other industries also depend on European workers, with more than 1.9 million EU citizens accounting for 6.1 percent of Britain's workforce last year, according to the Office for National Statistics. Manufacturing was the biggest employer of EU labor, with 292,000 workers, followed by wholesale and retail sales at 230,000, lodging and food service at 213,000 and health and social work at 176,000.

But few are as dependent on migrants as the produce industry. British agriculture employs about 67,000 seasonal workers every year and more than 80 percent of them come from other EU countries, according to the Home Office.

Migrant laborers usually are required to live on the farms so they can get into the fields early and work late as they race to pick ripe produce before it spoils. Laborers, who work on a piece rate, can bend down 4,000 times a day to cut celery or pick 20 kilograms (44 pounds) of strawberries an hour, according to a 2013 report from the Home Office's Migration Advisory Committee.

Losing the migrants will have knock-on effects throughout the soft fruit industry, which generates about 1.2 billion pounds ($1.6 billion) of retail sales.

As if that weren't enough, farmers also rely on EU subsidies, which are also in jeopardy as Britain forges a new relationship with the other 27 members of the trading bloc. While the government has promised to continue such subsidies until 2020, nervous farmers are already sorting things out for themselves.

Rendall, whose grandmother started the family farm when they moved to the U.K. from Israel in 1938, decided this year to postpone a 500,000-pound ($650,000) investment in cherry operations that would have generated about 1 million pounds ($1.31 million) in annual revenue.

"A business can't invest in an environment of uncertainty," he said.

Rather than wait to see what happens, farmers will protect their businesses by shifting planting from fresh produce to other crops, said L. Alan Winters, director of the Trade Observatory. That means the sweet summer strawberries and cream traditionally enjoyed by tennis fans at Wimbledon may soon come from the Netherlands or France, rather than British farms.

Such a shift is already underway, said Laurence Olins, chairman of British Summer Fruits. Larger growers are moving their capital and expertise overseas. Smaller ones will just die.

"Growers have to plan two to three years ahead in buying their plants and their trees," he said. "And I know growers who stopped expanding because they can't put an order in for their trees or plants because they don't know whether they will have labor in 2018 and 2019 to pick that crop. So already we will see the effect."

That means fresh fruit is likely to become more expensive, and those who want to buy local will find it increasingly hard to do so — despite recent efforts to persuade consumers that doing so is good for their health and the economy.

Britain could ensure the supply of labor with special visa rules for foreign agricultural workers, like those it had in the past. But with so much up in the air after the EU vote, it is unclear when that will be sorted out.

All of the uncertainty is troubling to Ismetova, who comes from Targovishte, an old market settlement in northeastern Bulgaria, where the best work she can get pays 2.30 lev ($1.30) an hour. In Britain, she earns 7.20 pounds ($9.45) an hour — about seven times as much — so she's willing to accept a job that has no firm hours or fixed days off. And besides, there is little work in Bulgaria, she said.

Even though the work is seasonal and the cost of living in Britain is higher than at home, Ismetova is content to live in a trailer with her husband, a driver in the pack house, and save money. She dreams of buying a house in Britain.

"If the U.K. stops people like me to come here to work, it would be bad news," she said.