Applications for U.S. Unemployment Aid Slip to a Low 266,000 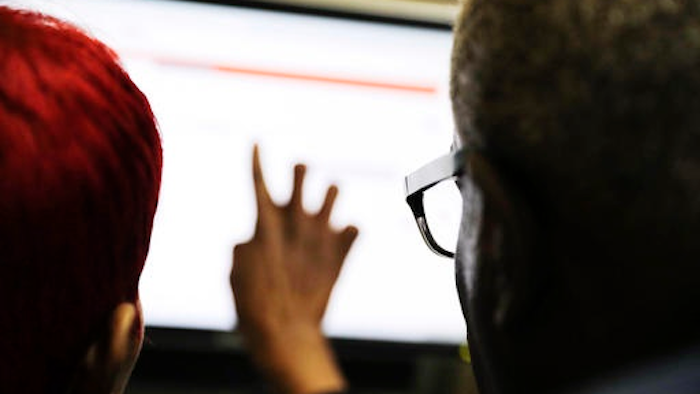 In this Thursday, March 3, 2016, file photo, Georgia Department of Labor services specialist Louis Holliday, right, helps a woman with a job search on a computer at an unemployment office in Atlanta. On Thursday, Aug. 11, the Labor Department reports on the number of people who applied for unemployment benefits in the previous week.
AP Photo/David Goldman, File

THE TAKEWAWAY: Applications are a proxy for layoffs and are at historically low levels. That suggests employers are confident enough in the economy to hold onto their staffs. At the same time, hiring has picked up: Employers added the most jobs in eight months in June and hiring was also healthy in July. The unemployment rate was 4.9 percent in both months.

Weekly applications have been below 300,000 for 75 straight weeks, the longest such stretch since 1970.

KEY DRIVERS: Businesses have hired at a healthy clip this summer, even as growth in the first half of the year was sluggish. The economy expanded at just a 1 percent annual rate in the first six months of the year. Still, most economists forecast a rebound in the July-September quarter to 3 percent growth or even higher.

The steady job gains are starting to benefit a broader swath of the population than the first few years after the recession, when wealthier Americans tended to benefit more. Average hourly pay has started to rise more quickly, particularly in lower-paying businesses, such as restaurants and hotels.

And more Americans are being pulled back into the workforce, though the proportion of Americans working or looking for work remains near four-decade lows.

One reason hiring has been solid even as growth was tepid is that the economy has become less productive, with worker's output per hour falling in the past year. That decline in productivity, if continued, could act as a long-term drag on growth.