The bailout of the U.S. auto industry by Presidents George W. Bush and Barack Obama remains popular in Michigan.

Ken ThomasDavid Eggert
In this file photo, workers assemble vehicles at a GM auto assembly plant. Trying to make a stand in Michigan, Sen. Bernie Sanders said that Hillary Clinton was being disingenuous when she asserted that he opposed the auto bailout.
AP Photo/Tony Gutierrez

(AP) — Trying to make a stand in Michigan, Sen. Bernie Sanders said Monday that Hillary Clinton was being disingenuous when she asserted that he opposed the auto bailout that rescued carmakers General Motors and Chrysler from oblivion during the economic crisis.

Sanders sought to defend his record ahead of Tuesday's crucial Michigan primary and blunt the former secretary of state's momentum in the Democratic presidential contest. The bailout of the U.S. auto industry by Presidents George W. Bush and Barack Obama remains popular in Michigan, the home of the U.S. auto industry, and has been credited with preserving the Midwest's manufacturing base.

"Secretary Clinton went out of her way to mischaracterize my history as it relates to the 2008 auto industry bailout," the Vermont senator said during a rally in Kalamazoo, Michigan. "Let me be as clear as I can: There was one vote in the United States Senate on whether or not to support the auto bailout and protect jobs in Michigan and around this country. I voted for the auto bailout."

Sanders was referring to a December 2008 vote in which Michigan's Democratic senators, Carl Levin and Debbie Stabenow, pleaded with fellow lawmakers to provide a $14 billion lifeline to GM and Chrysler, which were teetering on the brink of bankruptcy at the time.

Sanders and Clinton both voted in favor of the bill but it failed to clear the Senate, prompting Bush to announce about a week later that the federal government would step in with $17.4 billion in federal aid to help the carmakers survive and restructure. The bailout provided $13.4 billion at the end of the Bush administration with the last $4 billion contingent on the release of the second installment of the Wall Street bailout funds.

In Sunday night's debate, Clinton declared that Sanders "was against the auto bailout. In January of 2009, President-elect Obama asked everybody in the Congress to vote for the bailout. The money was there, and had to be released in order to save the American auto industry."

She added: "I voted to save the auto industry. He voted against the money that ended up saving the auto industry. I think that is a pretty big difference." Clinton's campaign began airing a radio ad in Michigan on Monday with a similar message.

Clinton was referring to a Jan. 15, 2009, vote in which the Senate considered a motion to block the release of the second half of the $700 billion financial rescue package. Both Bush and Obama, then the president-elect, had urged Congress to release the second $350 billion of the Troubled Asset Relief Program funds.

The effort to block the funds was led by Louisiana Sen. David Vitter, a Republican, and the measure was defeated by 45 Democrats, including Clinton, and a handful of Republicans. Sanders, who opposed the Wall Street bailout, voted with Vitter's side to block the money.

"What I did not vote for — and make no apologies — is to bail out the crooks on Wall Street whose illegal behavior and greed brought this economy into the worst downturn since the 1930s," Sanders said in Kalamazoo.

Keith Hennessey, who served as Bush's director of the White House National Economic Council at the time, said that while Clinton's comments during the debate were technically correct, he said she "misleads Michigan voters and others who supported the auto loans. She is playing semantic games in an attempt to create a policy difference where none exists."

But Clinton's campaign noted that the vote paved the way for an additional $4 billion to the auto companies. Stabenow told MSNBC following the debate that the January vote was critical for the industry. "We had to have that pass and so she's absolutely right and she was there with us every step of the way," said Stabenow, a Clinton ally.

Clinton's tactics offer parallels to a strategy that Obama used against Republican presidential nominee Mitt Romney in 2012. Romney opposed Obama's decision to pour billions into the industry to restructure GM and Chrysler and Obama repeatedly reminded voters in Ohio and other Midwest battlegrounds that he had saved auto jobs during his first term while Romney had opposed the bailout.

Sanders trails Clinton by nearly 200 pledged delegates — and even more when non-binding super delegates are included — and is trying to upset the former secretary of state in Michigan in Tuesday's primary. He hopes a strong showing in Michigan will help him in contests next week in Ohio, Missouri, Illinois and Florida and narrow the gap against Clinton in the chase for delegates. 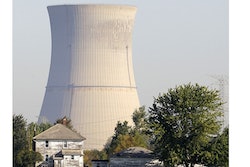