Residents and industrial plants will fund the $1.5 billion effort. 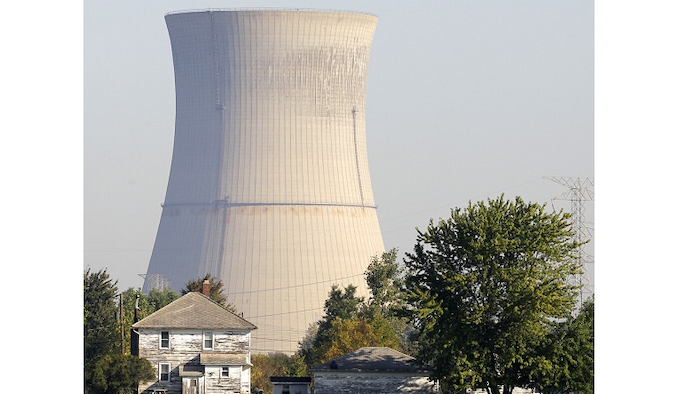 TOLEDO, Ohio (AP) — A financial rescue for Ohio's nuclear plants and two coal-fired plants that will force the state's residents and businesses to fork over roughly $1.5 billion is galvanizing environmentalists and some conservatives.

Advocacy groups and investors, incensed by what they call a bailout and how it will diminish the state's natural gas and green energy options, are looking at mounting a campaign to overturn it and targeting Republicans who backed it. Organizations representing the state's seniors and manufacturing plants are upset, too.

The upheaval comes as the Trump administration continues with its pledge to boost the nuclear and coal industries by easing regulations and guaranteeing loans for two new commercial reactors. But the fallout in Ohio shows how attempting to influence the market can be risky and alienate a wide swath of voters.

"We're getting involved in an area where the government has no business sticking their nose," said state Rep. Craig Riedel, a conservative from northwestern Ohio. "What we did with this bill is we absolutely tipped the scales to the nuclear plants."

Five states, including New York, Illinois and New Jersey, within the past three years have approved nuclear bailouts totaling at least $13 billion, funded by new charges on electricity customers. But Ohio is the first under Republican control to do so. Unlike the other states, its plan also cuts away at incentives for wind and solar projects.

That's why so many groups came away upset.

The money will come from monthly surcharges of 85 cents for residential customers and up to $2,400 for major industrial plants. Another statewide fee will be added for the two coal plants.

Those behind it say it will save several thousand jobs and protect the nuclear plants that account for nearly all of Ohio's clean energy.

Although a majority of the Republican-controlled Legislature backed the proposal, plenty of conservatives felt it went too far, picking winners and losers in the free market.

The monthslong debate divided Republicans to where it's likely to be a significant campaign issue in the primary elections next year, Riedel said.

"I don't think this is going away," he said.

At least one conservative group that fought to kill the plan has said it will consider going after lawmakers who voted for it.

Opponents flooded hearings on the legislation, including the Ohio Manufacturers Association and consumer groups like AARP, which has spoken out against bailouts in other states.

Another Republican, state Sen. Joe Uecker, said that he was against the auto industry bailout in 2008 under President Barack Obama and that he's against this one, too. He noted that the state didn't come to the aid of two coal plants that closed in the area of southern Ohio he represents.

Handing the nuclear plants a bailout, he said, will cost the state future investments in wind and solar and hurt the coal plants that aren't part of the bailout.

"All we're doing is hastening the demise of the existing coal plants," he said. "Are we going to bail them out also, or just the ones that are operated by politically connected corporations?"

Akron-based FirstEnergy Solutions, which is going through bankruptcy reorganization, spent millions on lobbying and campaign contributions while it was trying to persuade federal and state officials to give the nuclear plants a lifeline.

Its team of lobbyists includes a well-connected GOP fundraiser who dined with Trump last year as the company sought a bailout worth billions of dollars. Although it's not clear how much influence that meeting carried, the president later directed his administration to take steps to help coal and nuclear plants struggling to keep up with cheaper energy sources, calling it a matter of national and economic security.

An analysis from the Energy and Policy Institute, a utility watchdog that promotes renewable energy, found FirstEnergy Solutions spent $3.75 million since March 2018 on lobbying, public relations and advertising in Ohio and Pennsylvania, where it also was seeking subsidies for its nuclear plants.

A year ago, the push for a bailout seemed to have no chance as then-Gov. John Kasich and legislative leaders blocked the idea. But that changed with the election of new state leadership in 2018.

Dark money groups — some with ties to FirstEnergy Corp. — poured money into those races and months later lawmakers introduced their proposal to prop up the plants and stop them from closing.

Some of those same groups also spent millions on television ads backing the bailout. And a Trump campaign adviser made calls to state lawmakers, asking them to support the plan.

But whether the subsidies for the nuclear plants stay around might not be known until next year as opponents already are collecting signatures in hopes of overturning the legislation in a statewide referendum.

Sanders: Clinton off on Bailout Stance