“The mezzanine platforms made a lot of sense to us because we were already heating the space, and we had room above us to expand,” said Gerry Couture, general manager, Baker Distributing. 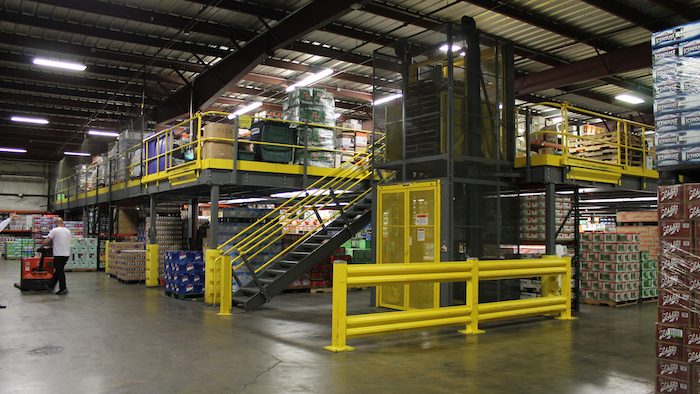 It’s a question that thousands of companies face every year: what’s the most cost-effective way to expand my facility?

Evaluating goals, objectives and long-term needs often leads executives to either streamline their existing facilities to find space, or build outward by adding on to their building as a way to accommodate growth. But rather than looking out, one solution that’s fast becoming a popular option can be found by looking up … and that’s exactly what Baker Distributing did.

“The mezzanine platforms made a lot of sense to us because we were already heating the space, and we had room above us to expand,” said Gerry Couture, general manager, Baker Distributing. “In hindsight, it was a smart decision.”

That decision was based on the recommendation of Steve and Scott Fawcett, CEO and president respectively, of Londonderry, N.H.- based Bode Equipment Co., who has worked closely with Baker Distributing for nearly 30 years.

Founded in 1965 by brothers David Sr. and Joseph Baker Jr., Baker Distributing carries a wide variety of alcoholic and nonalcoholic products; servicing more than 1,200 retailers throughout the state of Vermont. Today the company is operated by a second generation of family members, David Jr. and Mike, and has more than 220 workers at its two Vermont distribution facilities in Colchester and North Clarendon.

The push for expansion came in part from the brands Baker carries expanding their portfolio of products by means of line extensions. For example, some brands are now offering several different flavors — and those products need to be incorporated into the distribution process. This ongoing trend within the beverage industry has resulted in new SKUs — and the immediate need to create more space.

“Our industry is continually increasing with SKUs and line extensions. You need more space for all those SKUs, so these platforms allow us to better accommodate the trends in our industry,” Couture said.

Couture relied on Fawcett and his knowledge of material handling solutions to help devise an expansion plan that would best suit Baker’s needs. The initial plan was to expand the company’s north warehouse in Colchester. That facility had a limited footprint to work with, and the logical and cost competitive solution was to utilize the open overhead space. Fawcett believed the Baker operation would be a perfect candidate for an industrial steel mezzanine platform.

He designed a plan that called for the installation of two mezzanine platforms, combined with a VRC and a variety of safety gates and guard rail. One platform is long and narrow, 14 x 127 feet, and was built to fit alongside the building wall; the second platform measures 97 x 80, and is located in the pallet staging area in the back corner. The top of the narrow platform is used to house point-of-sale goods and displays. Baker relocated the small order picking operation on the second platform, freeing up valuable ground level space for other functions.

“The mezzanine platforms gave us a lot more space to pick the line, which is huge for us,” Couture said.

The relocation of small order picking to the top of the platform also includes order picking for wine bottles; having product and employees off the ground floor and away from busy forklift traffic increases safety.

The VRC at Baker is perfect for safely transferring materials from one level to the next. The VRCs comply with ANSI/ASME B20.1 safety standards for conveyors; can lift several thousand pounds of materials in an enclosed platform; greatly enhance warehouse safety and productivity; and come with safeguards, like Wildeck’s patented AutoSenz Overload Detection System (U.S. Patent No. 7,408,317), to prevent jams, product spillage or equipment malfunction.

“Having a VRC works great for us because we needed an apparatus to bring wine product down from the second level without disturbing the built pallet, and coming down on a forklift wasn’t the answer, otherwise we’d lose product,” Couture said. “The thing I love about the VRCs is that we’re building pallets for customers, and they can be very unstable due to their different shapes and sizes. The VRCs allow us to bring them down to the first level without any breakage. VRCs really made the best sense for us.”

In addition to the VRC, the mezzanine platform has two gates that allow pallets to be on- and off-loaded from a forklift.

The positive results of the Wildeck platform, VRC and safety gates in Baker’s Colchester warehouse allowed management to look at replicating a similar setup at its North Clarendon warehouse … and it did just that. Two mezzanine platforms, a VRC and safety gates were installed there in 2014. Although the platforms at both locations are similar in size and scope, their framing structures are different: the Colchester platforms use I-Beams whereas one of the two platforms in North Clarendon use bar joists. This flexibility and creativity in Wildeck’s framing options gives customers like Baker more choices in purchasing a platform that meets their exact specifications and load requirements. The footprint of the warehouse in North Clarendon was such that Baker wanted a mezzanine platform with columns spread further apart, but also desired a more open deck for utilities; thus the bar joist and truss girder design was selected.

Both warehouses have multiple forklifts operating during two shifts. To help protect the VRCs, Wilgard Guard Rail was installed, and is also used to protect other equipment such as shrink-wrap machines.

“We didn’t have a concern that Wildeck would be the bottleneck in these projects,” Fawcett said. “We worked closely with Wildeck and it was the right decision. These solutions worked out great for Baker.”

“Time and again Bode proves itself to be a soup-to-nuts first class company,” Couture said. “Their recommendation of Wildeck was right on the money. We couldn’t be happier with the solutions Wildeck and Bode provided.”