The $5B+ deal is Coca-Cola's latest move to diversify from traditional soda. 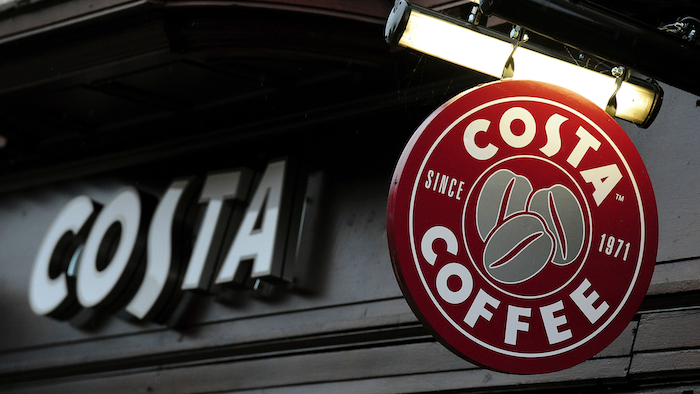 LONDON (AP) — Coca-Cola is hoping for a caffeine-fueled boost with the acquisition of British coffee chain Costa. The soda giant is spending $5.1 billion in cash for Britain's biggest coffee company. Costa has more than 2,400 coffee shops in the U.K. and 1,400 others in more than 30 countries, including around 460 in China, its second-biggest market.

It's Coca-Cola's latest move to diversify as health-conscious consumers, at least in America, move away from traditional soda. The company also recently said it's buying a stake in sports drink maker BodyArmor. Coca-Cola's other investments in recent years have included milk that is strained to have more protein and a push into sparkling water.

Coca-Cola already owns the Georgia and Gold Peak coffee brands, which make bottled and canned drinks. But the Costa acquisition gives it a much bigger piece of the coffee market, which is growing by six percent a year, according to James Quincey, Coca-Cola president & CEO. "Hot beverages is one of the few remaining segments of the total beverage landscape where Coca-Cola does not have a global brand," Quincey said.

The coffee market itself is hot at the moment. JAB Holdings, an investment holding company, has been buying up businesses and brands associated with Peet's, Caribou, Stumptown and Krispy Kreme Doughnuts. And in May, Nestle paid more than $7 billion for the rights to sell Starbucks coffee and tea in supermarkets and other stores outside its coffee shops.

Costa, which doesn't currently have a presence in North or South America, was the third-largest coffee shop chain globally in 2017, according to market research provider Euromonitor International, just behind McDonald's McCafe outlets but well behind Starbucks. Without being specific about expansion plans, Quincey said in a video posted on Coca-Cola's website that the company would "over time" look to take Costa "to more people in more places."

In addition to its shops, Costa has self-serve coffee machines in grocery stores and gas stations. Quincey indicated that one potential early expansion route would be to use Costa's vending operation and expand the company's ready-to-drink products. Nicholas Hyett, an equity analyst at London-based stockbrokers Hargreaves Lansdown, said Costa will get "lots of care and attention" from Coca-Cola.

"Its global reach should turbo-charge growth in the years to come, and hot drinks are one of the few areas of the wider beverages sector where the soft drinks giant doesn't have a killer brand," he said.

Coca-Cola does already have over 500 brands in its stable including Fanta, innocent smoothies and Powerade sports drinks. In 2017, it generated operating income of $9.7 billion on revenues of $35.4 billion.

Whitbread had bought Costa for 19 million pounds in 1995, when it had just 39 shops. It has invested heavily in Costa's expansion overseas recently, but had been looking to siphon off the business to generate funds for the expansion and for its other business, the budget hotel chain Premier Inn.

Then Coca-Cola got in touch with what Whitbread said was a "highly compelling" offer. The Whitbread board unanimously backed the deal, which is expected to close in the first half of 2019.