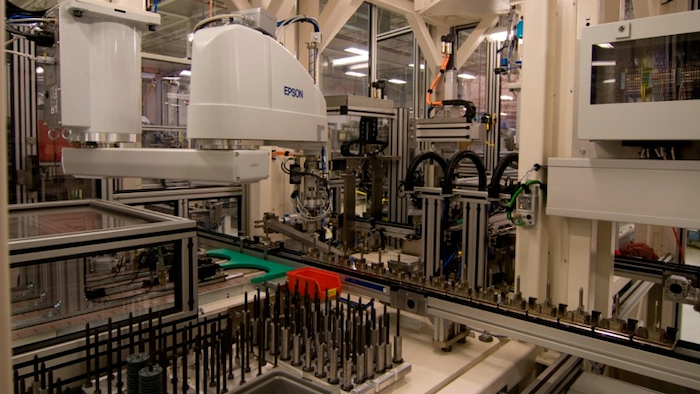 Washers of various sizes build up on a piston rod for assembly, with differing levels of air and oil fill to suit the specifications of the individual products at ThyssenKrupp; modular, programmable work cells provide great flexibility in production.
ThyssenKrupp

ThyssenKrupp Bilstein of America is a supplier of premium shock absorbers, struts, and suspensions to the auto, truck, racing and other markets.

With its recent development of the DampTronic Sky, which provides continuously variable damping force adjustment of the shock absorber to accommodate road and driving conditions, the company, with U.S. operations based in Hamilton, Ohio, recognizes the need for greater flexibility in its production on a global scale.

With a substantial assortment of products for OEM and aftermarket alike, ThyssenKrupp requires a scenario for fast recipe changes, with flexible and high-accuracy production of frequent short runs to suit its product demands in the market.

Further, with global operations in its manufacturing, the company always seeks to partner with automation suppliers who mesh well with the culture of ThyssenKrupp and the engineering requirements.

A viable solution for this challenge comes from Hahn Automation, based in Germany, with its U.S. operations headquartered nearby to ThyssenKrupp’s damper business, in Hebron, Kentucky.

This combination provides what Dave Vibbard, Senior Process Engineer at ThyssenKrupp terms a “glocal” relationship, a portmanteau word made from global and local.

Correspondingly, John Baines, president of Hahn Automation, says, “We also work under the philosophy that we should always build a system where it gets used, so we need a partner for the controls and application engineering assistance who can work seamlessly with both our German and U.S. operations. We find that supplier in Siemens and their local solution partner, C&E Sales.”

For this ThyssenKrupp project, the control supplier furnishes all drives, PLCs, master HMI and remote control pendants to give freedom of movement to the operators, as they work around the cell stations.

Siemens and C&E Sales also provides Hahn their application engineering assistance and the TIA Portal, an engineering network from Siemens which allows all programming of motion controllers, distributed I/O, HMI and other devices through a single point of command.

Hahn is able to utilize the TIA Portal at every step in the configuration and commissioning of the work cells for ThyssenKrupp on this project. As Baines says, “The diversity of products is all nonetheless similar in nature and mechanical composition, so many of the motion control commands and assembly sequencings use the library of programmed information in the TIA Portal. Siemens provides us considerable assistance on this project, though we have previous experience with this engineering network.” Baines further notes the TIA Portal results in significant cost and time savings for Hahn and ultimately the end user, ThyssenKrupp.

On this project, Hahn provides ThyssenKrupp several cells, comprising six “valve stacker” modules for the pre-assembly, kitting and riveting of the shock absorber washers and piston rod assemblies, plus the gas and oil fill, welding and functional testing procedures.

For each model produced, an assortment of washers with various profiles and dimensions is stacked on the piston, assembled and then the shock absorber body is filled with gas and oil, all to pre-programmed levels.

The “recipe” for each model made resides in the HMI onboard, which drives the individual module PLCs. At each station in the cell, an operator can instantly visualize the recipe in progress and enjoys the free movement around the cell, using the remote control pendant.

As the model changeover occurs, the master recipe exports the particular data requirements to each module and then the ramp-up of the overall cell begins anew. Washers of various sizes and profile configurations constitute the buildup of each model produced, so the required components arrive at the assembly stations via a series of 4-axis ABB iRB 360 FlexPickers and ceiling mounted Epson G10’s, utilizing Selective Compliance Articulated Robot Arm (SCARA) technology.

Functionally, the various commands transmit via the PLC, an S7-1500 from Siemens, which features seamless integration with the TIA Portal, as well as fully integrated onboard safety and security modules.

As Baines explains, “The setting adjustments are quite substantial for each damper product produced, so the load on the control system requires strict monitoring and validation. There’s the master cell with six modules, including four valve stackers and two final assembly stations. Interestingly, half our design and assembly work occurs in Germany and half happens here in Hebron, KY, where we also do the final configuration of the control platform, runout and performance evaluations prior to delivery to ThyssenKrupp.” He notes the support provided by Siemens, both in Germany and local to his facility.

Baines also cites the upgrade to the higher level Simatic S7-1500 PLC as a significant advantage for Hahn in the overall achievement of this project’s success. He particularly cites the safety and system security features, plus the fast response time and easy commissioning of this PLC platform for his team and TK personnel.

Greg Earle, VP for sales at Hahn, adds, “The Siemens TIA portal is a terrific engineering tool, as we are able to configure all the motor and drive components in a tag-based protocol for the individual slave PLCs and the master HMI. It is a very fluid connection process and, in the field, the operators enjoy the added benefit of movement, using the remote pendants provided with this system.”

As each recipe is called up, he adds, the changeover time significantly reduces, compared to the previous systems in use at ThyssenKrupp. The single supplier for the new component feed systems is in Germany, so the presence of both Hahn and Siemens there and here is a distinct advantage to TK on this project.

Dave Vibbard at ThyssenKrupp comments, “Hahn is extremely competent and also price-competitive on this project, a very desirable combination in any business relationship.  They were able to complete the build and execute the handshaking between the modules, with full verification on performance, error tracking, safety considerations, fault recovery and alarm alerts.” He notes an extra benefit on the operator screens is the dual language capability, so immediate access and troubleshooting is a fluid process for the engineering teams both in Germany and America.

In use, all the communications in the cell, whether from the robotics PLC, Siemens hardware and software systems or Hahn proprietary logic, transmit on a field bus to a single point of control and command, according to Vibbard, who cites this seamless protocol as a significant upside for our process engineers and maintenance personnel alike. “The assembly and testing procedures are all TCP/IP friendly, so the cell controls are easily accessible both by our team and remotely by Hahn for troubleshooting and faster resolution of any issues.”

According to the official ThyssenKrupp description of the new shock absorber technology that partially drove the development of this project, “The new DampTronic Sky damper (shock absorber) is a further milestone in resolving the conflict between driving comfort on the one hand – an aspect of particular interest in the premium segment – and the driving safety and agility of the car, on the other hand. In this new generation, two continuously variable valves adjust the damping force in each damper: one valve controls the rebound phase – i.e. the force that ensues when the wheel travels down – and the other controls the compression phase, as the wheel rebounds. Using the data it receives from the acceleration and wheel-path sensors, the control module of the suspension system individually adapts the damping forces for each wheel within just a few milliseconds to eliminate the effects of rough road-ride conditions that may detract from the driving comfort for the passengers, while at the same time controlling the dampers in such a way that the chassis stabilizes to the best possible degree. Thanks to the use of two adjustable valves, the damper is also able to ensure that the damping force adjusts according to the skyhook principle even in the high-frequency spectrum of wheel vibrations. By independently adjusting the extension and compression forces, the new ThyssenKrupp DampTronic Sky damper constitutes the high-end system in the semi-active damper segment.”

The customer here, ThyssenKrupp, is experiencing significant improvements in the production schedules with the Hahn Automation master cell on the floor at the facility in Hamilton, Ohio.

Baines concludes, “The relationship we established with and the solution we proposed to ThyssenKrupp would not have been possible without the assistance of the Siemens teams, both here in our area and in Germany, supplying product, engineering know-how and controls expertise in both locations.”