One of the little-talked about consequences of high traffic areas are the vehicular accidents that at times damage Montreal’s traffic lights. 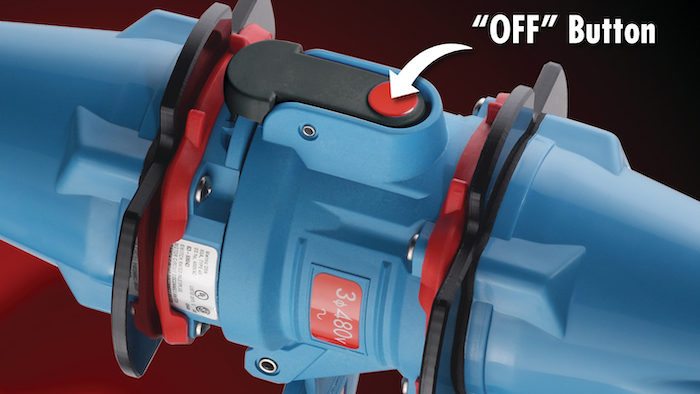 MELTRIC’s DSN60 Switch-Rated plug and receptacle was connected between the utility’s incoming power line and the Traffic Electrical Control Box to provide a local power disconnect.

Montreal is the second largest city in Canada and the leading urban center of the province of Quebec. It has long been a transportation, manufacturing and financial center due to its strategic location on the St. Lawrence River. It continues to be considered a modern, dynamic and exciting destination to visit.

Despite having a robust railway system, Montreal has seen over the last 50 years a steady rise in automobile usage and traffic congestion, like many urban centers in North America. One of the little-talked about consequences of high traffic areas are the vehicular accidents that at times damage Montreal’s traffic lights.

For a long time, the City of Montreal had experienced delays in repairing traffic lights that were damaged by accidents. These delays were often due to waiting for the electric utility, Hydro-Quebec, to dispatch a repair crew to disconnect power at the traffic light’s control box, which is required prior to work being performed.

This has caused a long-standing problem: the city’s union electricians would often wait a long time for Hydro-Quebec to arrive at the work site, which delayed the repair and, more importantly, created traffic flow disruptions. For years this problem was waiting for a solution until MELTRIC, a leading manufacturer of industrial plugs and receptacles, came along.

MELTRIC contacted the City of Montreal with what it believed was a solution to its problem: install MELTRIC’s Switch-Rated plug and receptacle between the utility’s incoming power line and the traffic light’s electrical control box. Since the plug and receptacle features an integral switching mechanism that can be operated safely by any qualified worker, power could be disconnected without Hydro-Quebec on site.

MELTRIC’s switch-rated plugs and receptacles combine the safety and functionality of a disconnect switch with the convenience of a plug and receptacle. They have a dead-front design and enclosed arc chambers to ensure that the power is safely disconnected, and that all live parts are isolated from the operator, before the plug can be removed. This design guarantees that operators are protected from exposure to live parts and arc flash while making and breaking power connections.

The switch-rated plug’s contacts are deenergized within the enclosed arc chamber before the plug can be physically removed. When the receptacle’s red-colored OFF button is pushed, the spring-loaded operating mechanism within it instantly opens the contacts to break the circuit, ejecting the plug to its OFF position. It takes about 15 milliseconds to break open the contacts in the enclosed arc chamber, which minimizes arcing.

More Than a Power Connection Problem to Solve

Prior to conducting a field test of the MELTRIC Switch-Rated plugs and receptacles, the City of Montreal needed to negotiate with its electricians’ union because of the union’s concern over the prospect of having non-electricians disconnecting power.

In addition, the union was also concerned that if the MELTRIC solution worked, some electricians would lose their jobs.

In 2010, after three years of negotiations, the City was finally ready to conduct a field test. Today, the union electricians continue to go on site, but now they disconnect power for the traffic light control box using a MELTRIC Switch-Rated device, without having to wait for the utility to arrive and disconnect power.

MELTRIC DSN60 switch-rated plugs and receptacles are now specified on all traffic light applications in the City of Montreal. Trelec (MELTRIC’s sales representative in Quebec) helped the Montreal’s city engineer design a special box to mount the DSN60 between the concrete base and the pole. It is typically installed between the point of contact with Hydro-Quebec and the Connection Enclosure. Trelec performs the pre-assembly of the product, including a special cable gland with labelling on the MELTRIC device to accommodate the 3-mono #6 conductors from the utility.

In November 2012, the first order of MELTRIC Switch-Rated devices was for only two units. Today, about 600 units have been purchased by the City of Montreal with another over 100 other devices currently on order. The master contract has called for 800 units over the next 3 years. But this is only the beginning: Montreal has about 3,000 traffic light intersections, and fewer than 20% of them have been converted to MELTRIC Switch-Rated plugs and receptacles!

The traffic light application has now been expanded to street lights in Montreal. There are 110,000 street lights and the City may purchase more than 5,000 MELTRIC DS100C/DSN150 devices.

Moreover, engineers are specifying MELTRIC devices on other projects in Montreal, such as a new parking automation system, consisting of 88 poles with an LED Panel that will show available space in downtown parking lots. The City’s large water treatment plant specifies MELTRIC switch-rated devices, with over 200 DSN60s already installed, as well as some DSN150s and DS60Exs.

It delivers a low-cost, reusable face shield that is made 15 mil thick and shatterproof.
Sep 15th, 2020

These are ideally suited to drive the company's complete line of voice coil linear actuators.
Sep 8th, 2020
Follow Us
Most Recent