Grubhub, UberEats, DoorDash and PostMates are fighting over a growing, yet diminutive slice of the restaurant market. 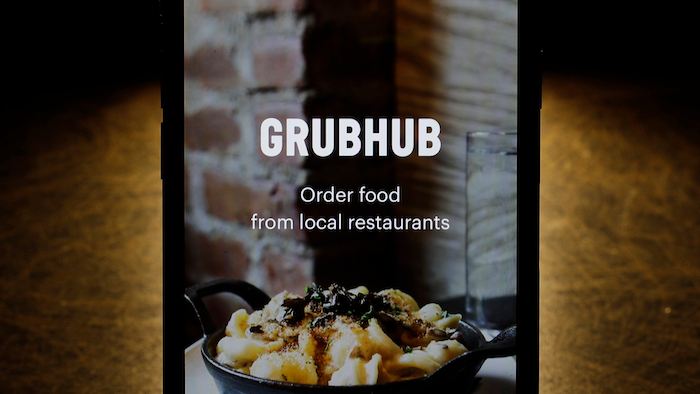 NEW YORK (AP) — Shares in Grubhub plunged 43 percent after it sharply cut its revenue expectations for the year and warned of intense competition. The steep decline in share price wiped away more than $2.3 billion of the company's stock market valuation. It is the worst single-day decline for shares since the company went public almost six years ago.

In a candid letter to shareholders, the company said that "supply innovations in online takeout have been played out" and that annual growth is slowing to a longer-term rate of low double digits. With rivals swarming into the market and using promotions to lure whatever customers they can get, Grubhub cut its fourth-quarter revenue projections to between $315 million and $335 million. Analysts surveyed by FactSet were expecting revenue of $387 million.

The company also trimmed its earnings forecast to between $15 million and $25 million. After the bell on Monday, the food delivery company reported third-quarter revenue of $322 million, a 30 percent increase from the previous year, but short of the $330 million Wall Street analysts were expecting.

And food sales grew 15 percent year-over-year to $1.4 billion, up from the $1.2 billion in last year's third quarter. But Grubhub is fighting for every sale and said Tuesday that it would be spending money on marketing and promotions to do just that. The Chicago company acknowledged that it is now playing in a crowded field and must do more to strengthen customer loyalty.

UberEats, DoorDash and PostMates are committed to doing the same and it's created something of a Wild West in the food delivery business. "As we dug into the data, we saw that our newer diners, particularly those in our newer markets, were not driving as many orders as we expected at that point in their lifecycle," the company said in the letter to shareholders. "Furthermore, we believe online diners are becoming more promiscuous."

Customers are choosing rival delivery services as they would meals from a menu, depending on the day. That is pressuring all companies in the sector. Earlier this month, PostMates postponed plans to become a publicly traded company, saying the conditions were not favorable.

Grubhub says it hopes to double the number of restaurants on its platform by the end of 2020 by expanding a pilot program that included non-partnered restaurants. The company admitted the new strategy contradicts its philosophy of delivering only for partnered restaurants and that it was not in the company's best interests long-term.

"It is expensive for everyone, a suboptimal diner experience and rife with operational challenges," the company said, adding that it was an efficient way to keep current customers and lure new ones. Grubhub said it will move quickly and increase spending over the next 12-18 months to implement the new strategy.

Grubhub's stock fell to $33.11 per share on Tuesday, less than half the price at the same time last year, and down 77 percent from all-time highs near $150 just over a year ago.

If there is a silver lining for Grubhub, it's that the online customer, millions of them, are up for grabs and they are spending. According to market research firm NPD Group, the forecast annual growth rate of digital restaurant orders from 2017 to 2020 is 22 percent.

In the year ending September 2019, two billion delivery orders were placed at U.S. restaurants, up five percent from the previous year. However, according to NPD, delivery represents only about three percent of all restaurant orders.

That means Grubhub, UberEats, DoorDash and PostMates are fighting over a growing, yet diminutive slice of the restaurant market.