They fear some projects could put fishermen out of business. 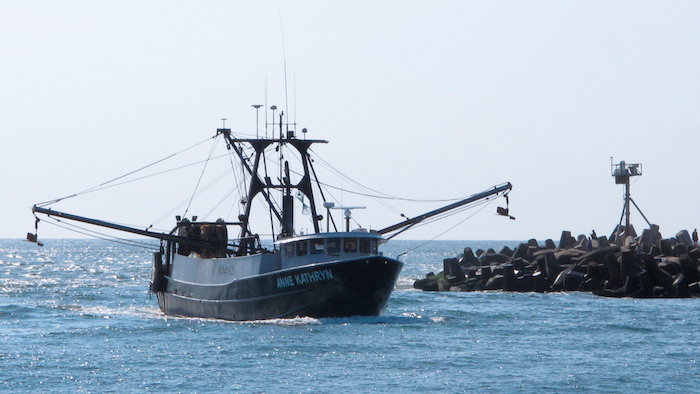 WILDWOOD, N.J. (AP) — Fishermen insisted Monday to a congressional subcommittee looking at offshore wind energy that they be consulted when crucial decisions are being made on the development of such projects, including where they are located and the level of access to the waters near them.

Fishermen should have been brought into the planning process from the start, Peter Hughes, of Atlantic Cape Fisheries, told U.S. House members from New Jersey and California who were holding a hearing at the Jersey Shore. "Look at these slides," he said, referring to diagrams of where proposed wind projects would be built. "They're right smack dab where we are fishing. This is going to put people out of business."

The purpose of the hearing was to gather input from the fishing industry and its advocates to be considered in future regulation of the nascent wind energy market. So far, a single five-turbine wind farm off Block Island, Rhode Island, is the only operating offshore wind farm in the U.S., but states up and down the East Coast are readying plans for similar projects.

Capt. Ed Yates, a fisherman from Barnegat Light, New Jersey, said flounder, cod and other species have moved away from underground cables at a wind project off Denmark. "How does offshore wind energy affect the fishing industry?" he asked. "The answer we get from the wind operators is 'We won't fully understand the impacts until the facilities are already built.'"

Frederick Zalcman, head of government affairs for Orsted, the European wind farm operator currently planning projects on the U.S. East Coast, said the company has met with fishing interests and will continue to do so.

Orsted recently changed plan specifications in Massachusetts and New York, he said, "at considerable time and expense to the company" to address concerns from fishermen. They included reconfiguring the design of a Massachusetts plan to allow fishing boats to better maneuver around and between turbines, and changing the location where a power cable came ashore in New York.

As additional plans are developed, he said, "we will have to prove ourselves" in terms of listening to the fishing industry.

The Responsible Offshore Development Alliance formed last year to represent the interests of the fishing industry regarding offshore wind. The group's executive director, Annie Hawkins, said more scientific studies are needed, adding there has been virtually no public discussion of important questions like how wind energy projects would be dismantled after reaching the end of their lifespans.

The hearing was chaired by Rep. Alan Lowenthal, a California Democrat, and Rep. Jeff Van Drew, a Democrat who represents the area of southern New Jersey including the productive Cape May fishing port. Southern New Jersey's port is second in the nation after the New Bedford, Massachusetts, area in terms of the value of seafood brought ashore each year, fishermen at Monday's hearing said.

"Anyone who has ever had a bowl of clam chowder owes a thank you to the development of New Jersey's fishing industry," Hughes said.