African swine fever has decimated pig herds in China and other Asian countries before reaching the Koreas. 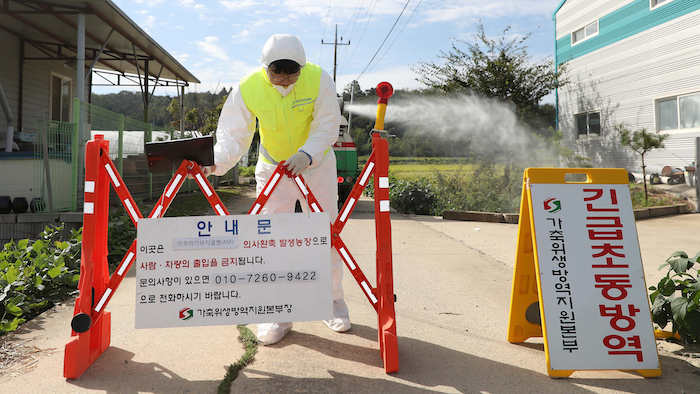 A quarantine official wearing protective gear places a barricade as a precaution against African swine fever at a pig farm in Paju, South Korea.
Kim Sun-ung/Newsis via AP

SEOUL, South Korea (AP) — South Korea is culling thousands of pigs after confirming African swine fever at a farm near its border with North Korea, which had an outbreak in May. Kim Hyun-soo, South Korea's agricultural minister, said the country's first case of the highly contagious disease was confirmed Tuesday in tests on five pigs that died Monday evening at the farm in the city of Paju.

His ministry later said it was looking into a suspected second case from a farm in the nearby town of Yeoncheon, where the owner reported the death of a pig, and that test results were expected by Wednesday morning.

Officials were planning to complete by Tuesday the culling of some 4,000 pigs raised at the Paju farm and two other farms run by the same family. The government also strengthened efforts to disinfect farms and transport vehicles and ordered a 48-hour standstill on all pig farms, slaughterhouses and feed factories across the country to prevent the spread of the disease, which threatens a massive industry that involves 6,000 farms raising more than 11 million pigs.

African swine fever has decimated pig herds in China and other Asian countries before reaching the Koreas. It is harmless to people but for pigs is highly contagious and fatal. There is no known cure. "We will invest maximum effort to prevent the disease from spreading ... we believe the first week (following the outbreak) would be most dangerous," considering incubation periods, Kim said during a news conference in Sejong City.

"We will quickly complete monitoring inspections at the 6,300 farms (nationwide) ... checking each pig to see whether it has fever or not and testing on even the slightest of symptoms," he said. South Korean President Moon Jae-in called for fast and stern quarantine measures to prevent the disease from wreaking havoc on the pork industry, the presidential Blue House said.

The outbreak in South Korea comes despite months of heightened monitoring efforts at border area farms after the disease spread to North Korea. In May, the North told the World Organization for Animal Health, or OIE, that 77 of the 99 pigs at a cooperative farm near its border with China died of the disease and the remaining 22 pigs were culled.

South Korea's agriculture ministry said investigators were sent to the farm to trace the source of the outbreak and it wasn't immediately clear if the disease would have crossed from North Korea. The ministry said in June that blood tests of pigs from some 340 farms near the border with the North came back negative.

North Korea has scaled back cooperation with South Korea after a summit between leader Kim Jong Un and President Donald Trump collapsed in February, and it has ignored repeated South Korean calls for joint efforts to stem the spread of the disease.

South Korea placed hundreds of fences and traps around border area farms to prevent pigs from being infected by wild boars that roam in and out of North Korea. South Korea's military, which had monitored the movement of wild boars through heat sensors installed along the border, said it would be difficult for wild boars to cross over barbed wire fences in the mine-scattered border zone. But government officials have said the animals could possibly swim across rivers.

Kim, the South Korean agricultural minister, said the Paju farm hit by the disease was about 1.5 miles away from a river that runs across the border. But it is a sealed indoor facility with no windows and is surrounded by fences to fend off wild boars. The farm's owner and four Nepalese workers said they hadn't recently traveled outside of South Korea, Kim said.

"We haven't been able to immediately confirm the infection route of the disease," Kim said. "We are trying to identify the cause as soon as possible because that would be crucial for preventing the disease from spreading."