Insects are cheap suppliers of protein, but how do you keep them fed to be raised as a food source? 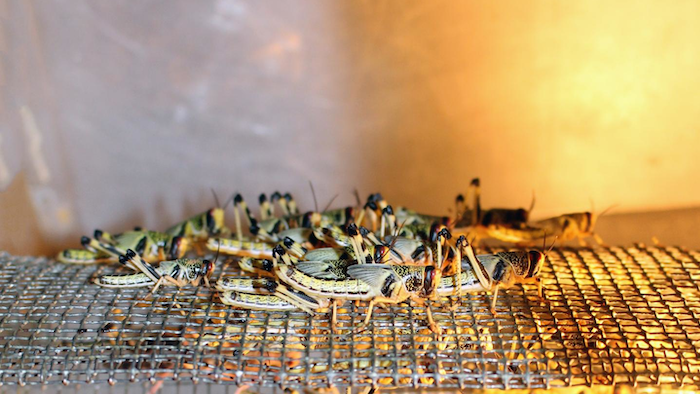 Given that they generate hardly any greenhouse gases, are undemanding, nutritious and fast growing, insects have generated a lot of hype in recent years. They are touted as the superfood of the future - cheap suppliers of protein that can even decompose all kinds of residual products.

"This all sounds very promising, but has little to do with reality," says Wilhelm Windisch, Professor of Animal Nutrition at the Technical University of Munich. "Anyone who hopes to keep animals professionally and on a large scale needs to know exactly what kinds of nutrients they need and can consume. And for insects, this is yet to be determined."

In collaboration with a German-Kenyan research team, the agricultural scientist has for the first time ever systematically investigated how various feed substrates influence the growth and development of crickets (Gryllus bimaculatus) and locusts (Schistocerca gregaria).

In the wild, both species feed on leaves. "But supplying large insect farms with fresh greens year-round is virtually impossible to implement," says Windisch. "You need feed of verifiable quality and safety that can be dried, stored and transported."

Commercial animal feed would fulfill these criteria. But, does it meet the nutritional needs of insects? At the renowned Centre of Insect Physiology and Ecology (ICIPE) in Nairobi, the team investigated how the two species responded to different feed choices. They tested different dry feed variants containing cornstarch, protein and fiber-rich cowpea leaves, protein-rich soy extract and vitamin-enriched carrot powder.

The researchers logged the amount of feed provided every day, weighed the excrements and finally determined the average weight of the adult insects. Two rounds of tests were carried out and evaluated over a three-month period. The goal: Nutritional recommendations for grasshoppers and co.

"The result surprised us," recalls Windisch: "It was clear to us that the metabolism and digestion are rather different in insects than in conventional farm animals such as cattle, pigs and chickens. What we did not expect were immense species-specific differences."

Locusts, for example, can process plant fibers that are indigestible by humans. Crickets, on the other hand, excrete fiber-rich food. Locusts grow quickly only when fed protein, while crickets need starch, above all.

The source of the differences is still unclear. In their next project, the researchers hope to investigate which enzymes are active in the intestines of various insects and which of them can, for example, convert plant fiber into glucose.

"The research is still in its infancy, but with each result we understand the metabolism and nutrient needs of individual genera better and can use the outcomes in professional insect farms to process biomass that, for example, could not be used previously because it is inedible for humans and livestock can process it poorly, at best," sums up Windisch.