Spotlighting how this group has shaped the industry as farmworkers and later vineyard owners in one of the richest wine regions in the world. 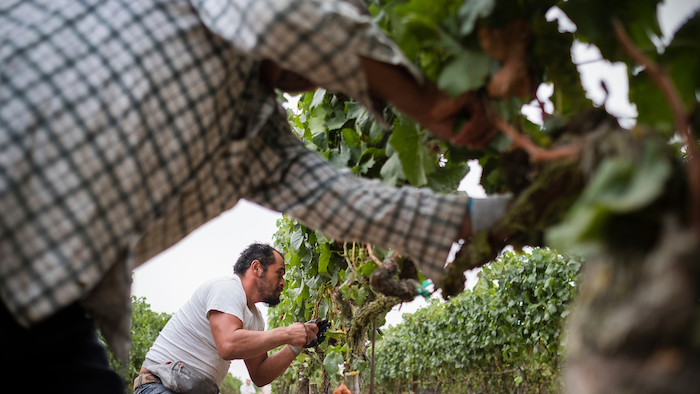 ALBUQUERQUE, N.M. (AP) — For generations, Mexican-born Gustavo Brambila's family has worked in the wine industry of California's Napa Valley in some form. He went to college on a baseball scholarship but the passion of flowery aromas and crisp peach flavor remained in his soul and he eventually got a degree in fermentation sciences.

His dream: His own vineyard.

Brambila's story and others are the focus of Harvest Season, a new PBS documentary examining the contributions of Mexican Americans in the wine industry of California's Napa Valley. The film, scheduled to begin airing Monday on most PBS stations as part of the Independent Lens series, shows how the Mexican Americans have shaped the industry as farmworkers and later vineyard owners in one of the richest wine regions in the world.

Through the eyes of winemaker Gustavo Brambila, Mexican migrant worker Rene Reyes and wine entrepreneur Vanessa Robledo, the documentary shows how the California wine industry's most silent figures battle weather, climate change and wildfires. They speak of their families' deep roots with vineyards and how it shapes their dreams for the future.

Director Bernardo Ruiz said he wanted his project to show that people of Mexican descent have been a part of U.S. history since its founding and winemaker is just one industry where this is evident. "From the outside, winemaking is very glamorous and it's very romanticized," Ruiz said. "What really drives it is really hard work."

In California, those workers tend to be immigrants and Mexican Americans, he said.

To be sure, Mexican Americans has played vital roles in the creation and development of vineyards in California, New Mexico and Arizona. But Lilia Soto, an American Studies professor at the University of Wyoming, who grew up in Napa, California, said Mexican Americans especially have been instrumental in the played formation of the Napa Valley as a tourist site by providing the labor and its family connections that go back generations.

Those connections help tell the story of the U.S., Ruiz said.

More where this is evident is with Vanessa Robledo. She's the granddaughter of a Mexican migrant worker who came to the U.S. through the Bracero Program — a World War II-era program that sought to give temporary guest contracts to work in the fields. Her grandfather and father ended up in the vineyards.

"My dad would always tell us, 'This is how our family will survive and it's our future,'" Robledo said.

In the documentary, Robledo talks about being pushed out of the family vineyard business because she was female, then finding her own path in the industry. She guides workers harvesting grapes in the cool of night and walking through the vineyard during the day with a stunning background of rolling hills and distant mountains.

Soto, who went to high school with Robledo, said such stories captured the essence of Mexican Napa as opposed to the tourism mecca Napa. "The film highlights a Napa that is often invisible to most visitors," Soto said. "These invisible people have always been here."

Six groups say the labels falsely imply the turkey brands have benefits for workers, animals and the environment.
Nov 24th, 2020

McCormick, which already owns Frank's RedHot, is getting even spicier.
Nov 24th, 2020

One company was also hit for employing a 15-year-old minor in meat processing.
Nov 23rd, 2020

How the Pandemic Has Impacted Seafood Trade & Consumption

It hasn't all been doom and gloom for the industry, as seafood delivery and home cooking have helped businesses weather the pandemic.
Nov 23rd, 2020

Two products distributed in 15 states have been recalled after an isolated positive test result for E. Coli.
Nov 23rd, 2020

Fish Farm Pays $31K in Back Wages Over H-2A Violations

The farm failed to reimburse H-2A workers for expenses incurred while traveling to their employer's location from their home countries.
Nov 23rd, 2020

Alleging food safety issues, the protests decried ending Taiwan's long-standing ban on US pork and beef imports that due to be lifted in January.
Nov 23rd, 2020

Trump's trade war with China led to a rocky few years for the industry, which is based mostly in Maine.
Nov 23rd, 2020

It is one of many shocking claims alleged in the lawsuit.
Nov 20th, 2020
Follow Us
Most Recent