News of a brewer planning to recreate beer from a salvaged bottle of English Ale surprised a scuba-diving Long Island brewer who has already done it. 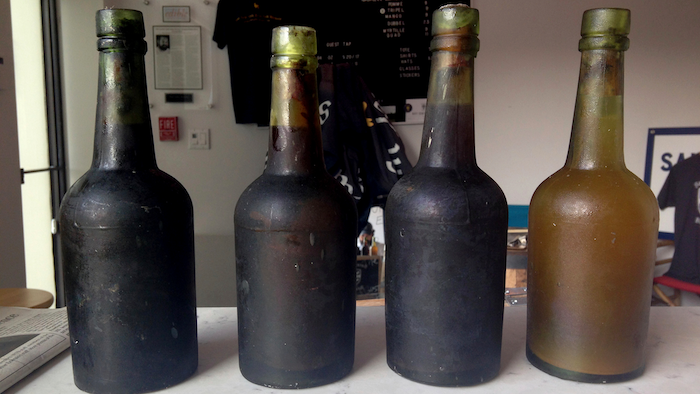 In this July 17, 2017 photo provided by Jamie Adams, four bottles recovered from the SS Oregon, a 133-year-old shipwreck, are shown at the Saint James Brewery in Holbrook, N.Y.
Jamie Adams via AP

ALBANY, N.Y. (AP) — News that an upstate New York brewer planned to recreate ale from a bottle salvaged from a 133-year-old shipwreck took the wind out of the sails of a scuba-diving Long Island brewer who has already done it.

Jamie Adams, owner of Saint James Brewery in Holbrook, said Wednesday he plans to release his new ale next month. He created it from yeast he painstakingly cultured from bottles of English ale he salvaged in 2017 from the wreck of the SS Oregon, which sank off Fire Island in 1886. Adams, who has been diving the 135-foot-deep wreck for nearly 20 years, was stunned when he saw an Associated Press story over the weekend describing another brewer's plans to use the Oregon yeast.

"One of the divers I had enlisted to help me find these bottles with the intent of making beer had given one of them to this other brewer, unbeknownst to me," Adams said. Adams learned about it when the State University of New York at Cobleskill announced that students were trying to culture yeast from a shipwreck bottle given to Bill Felter of Serious Brewing in Howes Cave. The plan was for Felter to create a new beer if the students were successful.

"I called Felter and he has agreed not to use the yeast," Adams said. "I'm glad we could work it out amicably without my having to take legal action." Felter told the Syracuse Post-Standard he's scuttled his plans out of respect for his fellow farm brewer. "I don't want to step on their toes."

The Oregon is "near and dear to Long Island scuba divers," said Adams, a former Wall Street trader who took up brewing and diving after 9/11. "It was the Titanic of its day. It was built as a luxury liner to ferry people between New York and Europe."

The wreck is 75 percent buried in sand, which shifts after storms to uncover various portions of the ship. "In 2017 we found the area around the first class dining room was accessible. It hadn't been for years," Adams said. Adams and fellow divers used a dredge to uncover artifacts including china, silverware, and bottles of ale with corks intact. Through research, he determined the bottles contained classic English ale.

"We've opened a few and have been able to propagate a few different yeast strains," he said. After making numerous test batches since 2017, Adams had a yeast strain he was confident would perform properly. "We're calling it SeaKing New York Ale," Adams said. It's set to debut March 9 at the annual New York Craft Brewers Festival in Albany.

Using Beer from an 1886 Shipwreck