These detector dog teams search at major ports of entry to detect prohibited agricultural products that can carry pests and diseases. 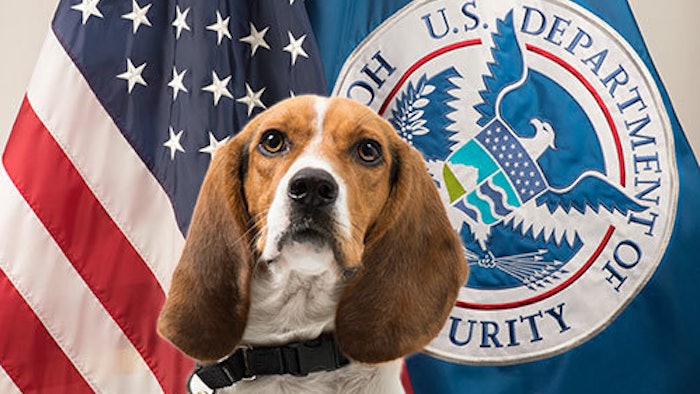 When Hardy, a U.S. Department of Agriculture (USDA) trained detector dog, sniffed out a roasted pig head in traveler baggage at Atlanta’s Hartsfield-Jackson International airport early this month, it underscored the efforts the USDA and its partners are undertaking to keep African Swine Fever (ASF), a swine disease that could devastate the U.S. pork producers, from entering the country.

The USDA trains dogs at its National Detector Dog Training Center in Newnan, Georgia. The center is designed and equipped to train detector dog teams (canines and handlers), like Hardy’s, to safeguard American agriculture. Additionally, the USDA's Animal and Plant Health Inspection Service Plant Protection and Quarantine program and the Department of Homeland Security’s U.S. Customs and Border Protection (CBP) use detector dog teams, known as the Beagle Brigade, to search for prohibited agricultural products at major U.S. ports of entry, mail and cargo facilities. The teams detect prohibited agricultural products that can carry foreign pests and diseases that threaten U.S. agriculture and forests.

“African Swine Fever is a devastating, deadly disease affecting all kinds of pigs, both domestic and wild – and keeping our pork industry safe is a top priority,” said Sonny Perdue, U.S. Secretary of Agriculture. “Recently, our collaboration with CBP proved successful when a USDA trained detector dog intercepted a roasted pig head in traveler baggage from Ecuador. The quick work of a beagle and the CBP staff prevented a potential animal health issue and further highlighted the need to be vigilant in safeguarding the U.S. against foreign animal diseases.”

Concern over ASF is not new. It is a long-standing disease found in countries around the world, particularly in sub-Saharan Africa. However, confirmation of cases in China and the European Union over the past several months prompted the USDA to review and strengthen its protections. The agency is also working closely with the swine industry and producers to ensure strict biosecurity procedures are in place and being followed on all swine farms.