A few years ago, it was determined that Digi-Key needed to expand its warehouse capacity. It was decided that the company would purchase a few hundred thousand square feet of warehouse space in Fargo, about 2 hours from its Thief River Falls facility.

For a time, the Fargo Facility was home to the larger and slower moving parts. Trucks made regular trips to bring product to Digi-Key's headquarters in Thief River Falls to get shipped. However, as its business evolved, additional shipping capacity for Digi-Key was required. The problem was that the Fargo facility wasn’t set up to accommodate it.

One area of concern was the conveyor system. It had been purchased used, it had to be modified to fit Digi-Key's needs. When the system was originally configured, a simple start/stop button was installed to control the conveyor. It was configured into three sections, power wise, which worked well so long as the volume of product was low. With the added volume of product ramping up in the facility, the button had to be constantly monitored otherwise packages would back up, get crushed, and some would even fall to the ground. This meant personnel needed to monitor the belt, tying up needed resources elsewhere. The system needed to be automated.

Joey Mulqueen, Product Manager for Automation products at Digi-Key, stepped in to reconfigure the system. Mulqueen traveled to the  Fargo facility to get a better understanding of the problem and provide a better solution. He saw there was a need to add a photoeye system that could detect packages as they reached the end of the conveyor.

Using Banner Engineering part number QS30VR3LP, Mulqueen created a way of sensing packages as they came to the end of the belt. He decided on a series of photo eyes using the Lite On function of the sensor, and placed the two photo eyes spaced 20 feet apart. When a package traveled down the belt and passed a sensor, it would not stop the conveyor. Once both sensors detected a package, it would trigger the belt to stop. Once packages were removed from the sensor fields, they would trigger the belt to then start again.

The existing design was a basic latching circuit to keep the motor running using auxiliary contacts. Since Digi-Key was going to implement a new PLC, the motor contactors were completely rewired. The motor contactor, Carlo Gavazzi part number CC9SA120, was wired to the new Logic Controller and the motor. The conveyor belt used 120 VAC and was the only readily available power source. Because cabinet space was limited, Mulqueen selected Crouzet’s Millennium 3 Controller, part number 88974143, to avoid the need for an additional power supply.

All systems will eventually need preventative maintenance or repairs which will require a bypass to the photoeyes. In order to offer an easy manual override that would be available on the outside of the control box, Mulqueen found a Omron selector switch, A22NS-2BM-NBA-G100-NN. This allows the maintenance team to work on the conveyor system without unexpected interruptions.

As always, safety was a top consideration. Mulqueen added in emergency stops to assure that the conveyor would not restart without a reset on both the emergency stop and the main control panel. For the Emergency Stops, they used Omron part number A22E-S-02. They also simulated a power failure to make sure that the belts wouldn’t start when the power came back on without hitting the start button.

The modifications have been a success. Already they have prevented countless packages from being damaged. This also frees up employees to work on picking product, packaging, and the move up of product as it is received.

Mulqueen’s selections of product have also made it possible for future improvements such as more sensors that will stop the different sections to further improve efficiency. All the products selected for use on this project are in stock and can easily be found on www.digikey.com. 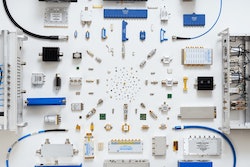 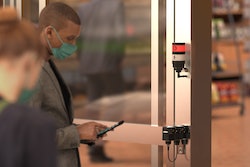