For now, deaths by robot are very rare among industrial accidents.

Dan Sewell
In this Tuesday, Aug. 1, 2000 file photo, visitors of the world exhibition Expo 2000 stand in front of a robot display at the "Planet of Visions" exhibit at the Expoground in Hanover, northern Germany. Use of robotics in manufacturing and other sectors is increasing in countries from the United States and China, and robots have long been embraced for a variety of uses in countries such as Japan. There also has long been “robophobia,” stoked by science fiction writers and moviemakers.
AP Photo/Fabian Bimmer

CINCINNATI (AP) — Robots are secretly plotting to kill us. Or enslave us. Or, at best, they will take our jobs, one by one.

From science fiction written by Isaac Asimov eight decades ago to "Dilbert" cartoons today, the relationship between robots and humans has long fascinated — and worried — people.

There's even a term, "robophobia," for an irrational anxiety about robots and other advanced automation machines.

And there are concerns beyond the ones stoked by watching too much "Terminator ."

Apple computer pioneer Steve Wozniak once suggested that robots would turn us into their pets . Physicist Stephen Hawking and tech entrepreneur Elon Musk have also warned about the dangers of going too far, too quickly, in developing "thinking robots" with programmed intelligence that might keep evolving self-awareness, similar to the humanoids in the HBO series "Westworld ."

Hawking told the BBC in 2014 that "development of full artificial intelligence could spell the end of the human race."

Researchers vary in projections on how long from now, if ever, such a threat could exist.

For now, deaths by robot are very rare among industrial accidents. However, in July 2015, a 57-year-old technician was killed by a robotic machine in an Ionia, Michigan, plant that makes auto bumpers, trailer hitches and chrome-plated plastics. Her husband filed a federal lawsuit, being contested by the defendants, alleging a malfunctioning robot took her "by surprise," crushing her head.

"You have to start this discussion with the baseline that automation and innovation creates jobs," he said, by leading to new products and processes and the new jobs to make and operate them.

"Then you have to ask yourself, why would robots be different? And people are very quick to say, 'Well, robots are intelligent, they do what humans can do,' and there's this fear that was sort of instilled by science fiction."

Comparing fear of robots to 19th-century worries about steam engines, Choset said: "Robots are just the next generation of tools."

Singer Aimee Mann, with help from actress Laura Linney, humorously depicted the danger of letting robots help you too much in this music video .

And Choset was amused by a recent "Dilbert " strip about the boss' inability to stop a robot worker who decided to quit.

Chris Boggess, 18, found the 2004 movie "I, Robot ," about a rogue killer robot drawn from Asimov stories, frightening, but he has come to understand and appreciate their potential through the Butler Tech robotics program at Colerain High School near Cincinnati.

"The first day I walked in, I fell in love. I knew this was where I needed to be," Boggess said. "I like robots, anything about technology."

And if some day thinking robots acquired the ability to threaten humans, he said, "I would probably try to make friends with them." 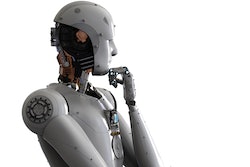 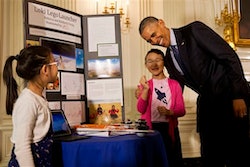 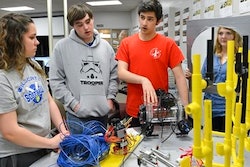