The White House Science Fair is an annual opportunity to show off the nation's budding inventors, engineers, astronauts and researchers — and to impress the nation's science fan-in-chief. 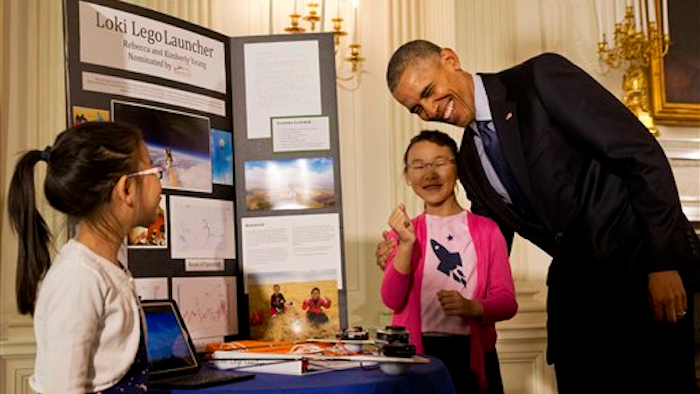 President Barack Obama laughs as he hugs Rebecca Yeung, 11, from Seattle, Wash., next to her sister Kimberly Yeung, 9, as they show him their homemade “spacecraft” that features a photograph of their late cat and is made of archery arrows and wood scraps which they launched into the stratosphere via a helium balloon that records location coordinates, temperature, velocity, and pressure and reports the data back to the them, Wednesday, April 13, 2016, during the 2016 White House Science Fair at the White House in Washington.
AP Photo/Jacquelyn Martin

WASHINGTON (AP) — They came with eco-glue and Lego launchers. Their tag board displays were filled with charts, graphs and research on pollution. There were no little kids with plaster volcanoes in this crowd. But there was a trash-eating robot.

This was the White House Science Fair, an annual opportunity to show off the nation's budding inventors, engineers, astronauts and researchers — and to impress the nation's science fan-in-chief.

"You remind us that together through science we can tackle some of the biggest challenges we face," President Barack Obama told the more than 130 students gathered at the White House on Wednesday. "You are sharing in this essential spirit of discovery that America is built on."

The fair is a favorite within the White House, in part because of the president's clear delight in the often impressive displays of young brains and creativity. As he has since he began the fair in 2010, Obama toured the sampling of exhibits, asking questions, pressing start buttons, smiling with approval, and, at times, ribbing the earnest presenters.

"My only concern is that, you know, you may have trouble getting into college," Obama joked with 18-year-old Sanjana Rane from Prospect, KY, after listening to her detailed explanation of how she helped figure out a particular protein could be used to detect and treat renal fibrosis.

Olivia Hallisey, 17, of Greenwich, Connecticut, created a diagnostic test for the detection of the Ebola virus. Augusta Uwamanzu-Nna, 17, of Elmont, New York, found a way to improve undersea cement seals to keep offshore oil wells from leaking. And Hannah Herbst, 15, of Boca Raton, Florida, created a device to tap energy from ocean currents.

As he toured the exhibits, Obama admired the sticky "GlOo" a St. Louis Girl Scout Troop made out from Styrofoam (patent pending) and a group of New York City teens' robot vacuum designed to pick up trash on the subway. He marveled at the "Loki Lego Launcher," a homemade spacecraft that shot up 78,000 feet in the air before it landed in a field, next to cow pie, according to inventors 9-year-old Kimberly and 11-year-old Rebecca Yeung.

"But cow poop didn't get on this?" the president said as he looked at laucher. "You're sure."

Obama, who is something of a frustrated science geek, noted this was not his path as a student.

"First of all, I didn't have a 'field,'" he said. "I don't know exactly what my field of study was at that time but it wasn't that."

The administration is also using the event to cite progress on improving education in science and math, noting $1 billion in private investment as part of a White House campaign and that the nation is more than halfway toward reaching Obama's goal of preparing 100,000 new math and science teachers by 2021.

Obama personally sent out a Twitter invitation to Cedrick Argueta after reading how the Los Angeles teen got a perfect score on his Advanced Placement Calculus exam.

"I couldn't believe it. But of course, I said yes," Argueta wrote on the White House blog. "I can't wait to meet other students who are also passionate about science and math — students who I'm sure will change the face of technology and help solve some of society's biggest problems, like fighting climate change and treating cancer."