The usefulness of underwater robots in today's world is not limited to deep space exploration. 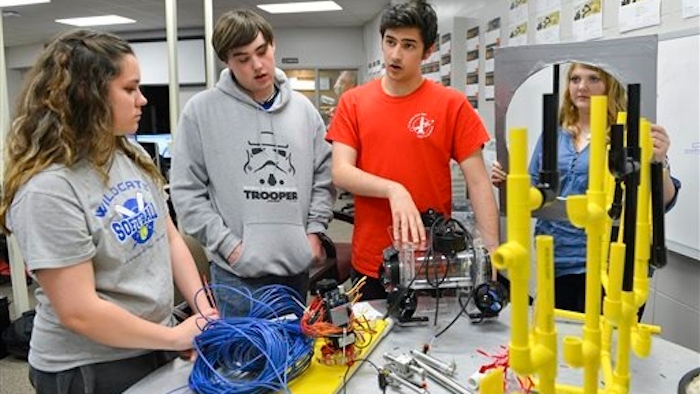 After 20 years of competing in land-based robotics competitions, students at the Limestone Career Technical Center are taking their skills beneath the waves. For the first time, the school will compete in an underwater robotics competition to take place next month at the Dauphin Island Sea Lab.
Jeronimo Nisa/The Decatur Daily via AP

ATHENS, Ala. (AP) — After 20 years of competing in land-based robotics competitions, students at the Limestone Career Technical Center are taking their skills beneath the waves.

For the first time, the school will compete in an underwater robotics competition to take place next month at the Dauphin Island Sea Lab.

The competition is representative of the growing presence of robotics in industrial applications and for scientific research.

It will test the students' abilities to perform underwater tasks that engineers currently accomplish with remotely operated vehicles or ROVs, as well as tasks they hope swimming robots will perform in the future.

"One of the big things in the ROV community right now is the fact that one of Jupiter's moons may contain liquid water and NASA is trying to basically design a probe to figure out if it does or not," said Blake Bennett, the 11-member team's electronics and programming captain.

But the usefulness of underwater robots in today's world is not limited to deep space exploration.

To win, the students' robot must complete a variety of underwater tasks, including capping an underwater oil well, taking oil samples, conducting deep-water studies of coral reefs and recovering fallen satellites from the sea floor.

Underwater robots are used today to inspect underwater pipes at the Browns Ferry Nuclear Plant, said the team's coach, Casey Wigginton, who also is a teacher at the career technical center.

"Really, the skills are universal. You could almost take any kind of automation or robotic application and do it underwater," he said.

According to Grant Reeves, a retired tool and process engineer for Chrysler and a 17-year volunteer mentor for the school's land-based robotics team, the skills the students pick up on the project will make them more desirable to companies in the future.

"We've already got a huge amount of robotics going on right now, but certainly as the industries mature, we will continue to try to make a more efficient robot, and robotics also helps with your quality," he said.

The students have been working on their robot since August, learning how to adapt their land-based robotic skills for use underwater.

Their machine is made from components made at the school with a laser engraver and a 3-D printer. The students also must write their own software to control the tiny submersible.

A bucket of failed components sits in their lab, a reminder of what they tried without success.

"It's kind of like the whole designing of the light bulb thing, where we found a bunch of ways you don't build a robot," said team member Kaitlyn Abernathy, who specializes in 3-D printing and plans to major in electrical engineering in college as well as serve in the U.S. Air Force.

The underwater project is attracting industry attention, garnering donations from companies such as EFI Automotive.

Wigginton said the team's talent pool — which includes the only two high school students in the state to be certified in LabVIEW, an advanced programming language used by professional engineers — will help them in the competition.

"Just these 11 students represent the valedictorians from several schools this year, so it's a pooling of some of the best students we have to offer in Limestone County," he said.

The team plans to have its robot complete by April 1. They will test it in an indoor pool at Athens-Limestone Hospital before advancing to the Marine Advanced Technology Education competition April 22-24.

There they will compete in the Ranger division — the highest level available for new high school teams — facing about 15 other high schools from across the Southeast. The talent pool includes the veteran team from nearby James Clemens High School, part of the Madison city school system.

While their robot will only be operated in a 20-foot-deep pool with simulated activities, the students won't be able to directly view their robot. Instead, they'll be isolated in a booth with only the robot's video and sensor data to guide them.

If they win at Dauphin Island, the team will move forward to the international competition in Texas in June.

If they advance to the international level, the students will have to adapt their robot to take underwater pressure and temperature readings in addition to the regional competition tasks.

To date, the team has raised $5,320 of the $7,500 in crowdfunding donations they hoped to raise to fund design and construction of the robot as well as pay for items, such as matching uniforms.

It is soliciting donations from individuals and from industries.

"We've got enough to take the robot down and compete, but we may not have a lot of the extra bells and whistles," Wigginton said.

According to Superintendent Tom Sisk, the robotics team relies on the interest and participation of technology companies across the region.

"I'm quite impressed with the work that is going on at the career tech center, and I would certainly add that we could not do these kinds of events without the staunch support that we receive from business partners across Alabama," he said.