Air Force leaders have reversed the Obama administration's view of the A-10 attack plane as an unaffordable extra in what had been a time of tight budgets. 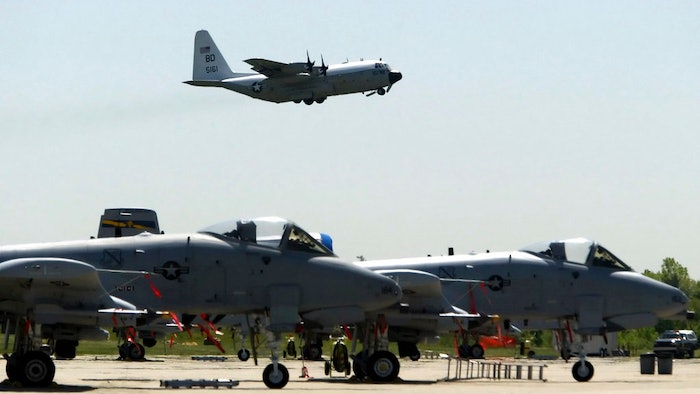 FILE - In this May 13, 2004 file photo, A-10's from the 111th Fighter Wing are seen in the foreground as a U.S. Navy C-130 takes off from N.A.S. J.R.B. Willow Grove in Willow Grove Pa. The Warthog is sitting pretty. Once on the brink of forced retirement, the A-10 attack plane with the ungainly shape and odd nickname has been given new life, spared by Air Force leaders who have reversed the Obama administration’s view of the plane as an unaffordable extra in what had been a time of tight budgets.
AP Photo/Joseph Kaczmarek, File

Once on the brink of forced retirement, the A-10 attack plane with the ungainly shape and odd nickname has been given new life, spared by Air Force leaders who have reversed the Obama administration's view of the plane as an unaffordable extra in what had been a time of tight budgets.

In the 2018 Pentagon budget plan sent to Congress this week, the Air Force proposed to keep all 283 A-10s flying for the foreseeable future.

Three years ago, the Pentagon proposed scrapping the fleet for what it estimated would be $3.5 billion in savings over five years. Congress said no.

The following year, the military tried again but said the retirement would not be final until 2019. Congress again said no.

Last year, officials backed away a bit further, indicating retirement was still the best option but that it could be put off until 2022.

Now the retirement push is over, and the Warthog's future appears secure.

The Air Force has similarly dropped plans to retire the iconic U-2 spy plane amid prospects for bigger budgets under President Donald Trump. It also reflects the relentless pace of operations for combat aircraft and surveillance and reconnaissance planes that feed intelligence data to war commanders.

The service had complained for years that its inventory of aircraft was getting dangerously small and old. Gen. Mark Welsh, who retired as the top Air Force officer last year, was fond of describing the service as having 12 fleets of aircraft that qualify for antique license plates in the state of Virginia.

The A-10 is a special case. Rep. Martha McSally, a Republican from Arizona who flew the A-10 in combat and commanded a squadron in Afghanistan, speaks of it with obvious affection.

"The A-10 is this badass airplane with a big gun on it," she said she told Trump in a recent conversation, explaining why the Warthog is unlike any other attack aircraft.

The "big gun" to which she refers is a seven-barrel Gatling gun that is nine feet long and fires 30mm armor-piercing shells at a rate of 3,900 rounds per minute. Also armed with Maverick missiles, the A-10 is effective not only in a conventional battle against tanks and other armored vehicles. It also provides close-air support for Iraqi and other U.S. partner forces taking on Islamic State fighters in the deserts of Iraq and Syria.

A number of A-10s fly missions in Syria from Incirlik air base in Turkey.

McSally is among members of Congress for whom elimination of the Warthog carried political risks back home. Sen. John McCain, a fellow Arizona Republican, joined her in strenuously arguing against the plane's early retirement.

Arizona's Davis-Monthan Air Force Base is home to an A-10 unit; retirement of the aircraft might have made Davis-Monthan more vulnerable to closure.

A veteran of combat in Iraq, Syria, Afghanistan, and beyond, the plane entered service in 1976. It is among Cold War-era icons like the venerable B-52 bomber that have exceeded expected lifespans and are likely to remain central to U.S. air campaigns for years to come.

Specially designed for the Cold War mission of attacking armor on the front lines of a potential European war with the Soviet Union, the A-10's air crews considered it so ugly they called it the Warthog. Its official nickname is Thunderbolt II. The plane has been out of production since 1984 but has received many upgrades over the years, most recently with new electronics.

Air Force Names the B-21 Bomber