BAE says the first steel will be cut next year. 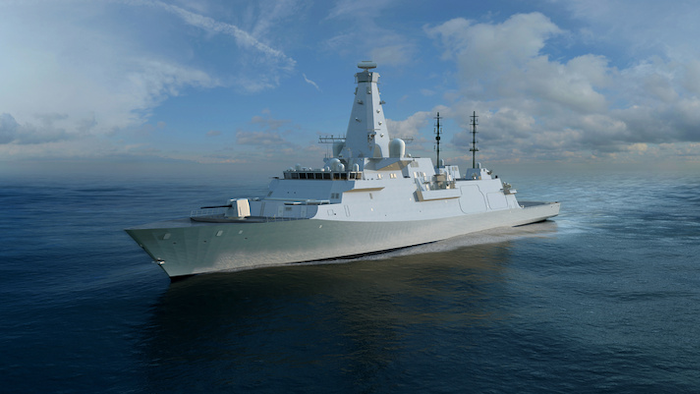 The UK Government committed to eight advanced anti-submarine warfare ships and has invested $2.11 billion in the program.

BAE Systems has confirmed that the first steel will be cut on the Royal Navy’s Type 26 Global Combat Ships in Glasgow in summer 2017, subject to final contract negotiations with the UK Ministry of Defense (MOD).

During a visit to BAE Systems’ shipyard in Glasgow Defense Secretary Michael Fallon said, “Backed by Britain’s rising Defense budget, the Type 26 Program will deliver a new generation of cutting-edge warships for our Royal Navy at best value for taxpayers. The UK government’s commitment today will secure hundreds of high-skilled shipbuilding jobs on the Clyde for at least two decades and hundreds more in the supply chain across Britain.”

The UK Government committed to eight advanced anti-submarine warfare ships in its 2015 Strategic Defense and Security Review (SDSR) and has to date invested a total of $2.11 billion (£1.9 billion) in the program. Manufacturing contracts are already in place for the procurement of major equipment for the first three ships, supporting progress to the full manufacturing program in Glasgow.

To date there are 27 companies in the supply chain working with BAE Systems to deliver the Type 26 ships, with manufacturing of the ships’ air weapons handling systems, gas turbines, and electric propulsion motor and drive systems underway across the UK.

BAE Systems is also under contract to manufacture the Maritime Indirect Fire System, including its 5-inch 62 caliber Mk 45 gun, for the first three Type 26 ships and the MOD has announced a contract with MBDA to deliver the Sea Ceptor self-defense missile system for the fleet.

The Type 26 Global Combat Ship will be a world-class anti-submarine warfare ship and will replace the Type 23 frigates. Globally deployable, it will be capable of undertaking a wide range of roles from high intensity warfare to humanitarian assistance, either operating independently or as part of a task group.

The announcement provides BAE Systems and the UK Government with the confidence to continue to progress export campaigns for the Type 26 Global Combat Ship with other navies around the world with similar requirements, including Canada and Australia.

Plans are also on track to finalize a contract to build two further Offshore Patrol Vessels (OPVs), which the Government committed to in the SDSR, providing continuous warship production in Glasgow through to the Type 26 program.

The OPV design builds on the Royal Navy's existing River Class ships and variants are already in service in Brazil and Thailand. Engineers at BAE Systems have modified the design to meet the requirements of the Royal Navy in support of UK interests both at home and abroad. The new River Class OPVs will be globally deployable and capable of ocean patrol.

Commenting on this important development Ian King, Chief Executive, BAE Systems, said, “Today’s announcement secures a strong foundation for the next two decades of shipbuilding at our facilities in Scotland.It is a vote of confidence in our employees’ capabilities in the design, construction, integration and commissioning of warships.”