Did customers need to know?

While nearly every automaker has struggled to maintain production after the pandemic-initiated chip shortage, there was one who stood out for having withstood the challenges more than effectively: Tesla.

Breaking from the trend of languishing production, Tesla announced in January that its 2021 deliveries were up by about 87 percent.

And according to CNBC, Tesla had a secret solution that it was using to hit these outsized production goals that is only now being revealed: the company reportedly took chips from one part of its vehicles and used them elsewhere where there was a more pressing need. And while other automakers have made these types of shifts, some analysts suggest it’s not been done quite this way before.

CNBC cites two anonymous Tesla employees who say the company decided to cut a steering component they considered “redundant” in order to reuse the needed chips elsewhere. The chip is considered a backup for a more mechanical process used to steer; in this case, it’s an secondary electronic control unit that would be critical for the kind of self-driving that Tesla doesn’t offer now, but plans to in the future.

Possibly the near future, actually. According to comments made by Elon Musk on a recent earnings call, Tesla’s chief executive predicted the company would achieve Full Self-Driving this year “at a safety level significantly greater than a person” and that it could be deployed via a software update. That is, for those cars with the electronic control unit that wasn’t cannibalized in recent months. For those drivers – for now in China, Europe and Australia – they’d need a retrofit.

And somebody would also need to tell them. CNBC says Tesla engineers weighed whether customers needed to know about the switch and decided against alerting the public since they didn’t see a functionality or safety risk at this time.

Even so, IHS Markit Senior Principal Analyst Phil Amsrud told CNBC that most automakers would spend 1,000 hours on testing or more to make any big changes. Instead, said the report, Tesla employees contend “the company spent less than a few weeks discussing the change before moving ahead and didn’t view it as a big deal.”

They added that the company “had previously produced earlier models that featured a power steering system with only one electronic control unit, and that gave them greater confidence.” 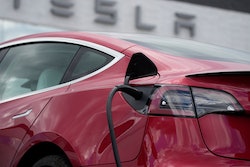