The unsafe conditions range from standing in pools of chemical water to seeing sewage on the floor during a shift.

Employees of a Refresco bottling factory in Wharton, New Jersey are voicing their displeasure.

Yahoo! News reports the workers filed federal complaints with OSHA to report unsafe conditions. The employees also gathered outside the facility, where they held signs bringing attention to their cause.

An immigrant rights group, Wind of the Spirit, and community residents accompanied the disgruntled employees, many of whom are Latin American immigrants.

At the rally, the Refresco workers expressed their desire for the company to begin negotiations with their union.

The employees voted to form a union in June following a year and a half of organizing. Factors such as low wages, minimal benefits and sexual harassment led to the decision to start a union. After the vote, Refresco, the largest independent bottling corporation in the world, filed a legal appeal against the move to form a union.

A machine operator of 15 years said, "We are working in unsafe conditions, with low salaries. Refresco ran an aggressive anti-union campaign to intimidate and try to silence us and now is refusing to negotiate with our union."

A lead machine operator added, "We are treated like animals."

An OSHA complaint mentions standing in pools of chemical water, seeing sewage on the floor during a shift, minimal to no time off, understaffing, lack of adequate machine operation training and being near loud machines, which caused hearing loss in some cases.

Union representatives said when two fires started at the plant in September and October, no fire alarms went off and the fire department was not called.

The union requests OSHA perform an inspection at the plant with union representatives present. 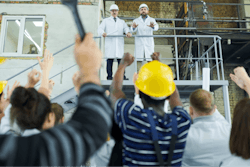