To qualify for the record, it had to be identical to a commercially available model, which would cost between $1.6 and $2 million.

The 1,750-hp supercar, driven by Oliver Webb, had an average speed of 316.11 mph after two runs outside of Las Vegas near Pahrump, Nevada - a seven-mile stretch of State Route 160.

In accordance with world record criteria, the Tuatara traveled in opposite directions, clocking its two speeds within one hour. Validating the results were Dewetron GPS measurements, which tracked the runs using an average of 15 satellites.

Some of the features that allowed the Tuatara to break the former record of 277.9 mph set by a Koenigsegg Agera RS in 2017, included a 5.9L twin-turbo, flat-plane crank engine running on E85 fuel, and a CIMA 7-Speed computerized manual transmission.

Additionally, in order to handle the amount of heat generated by a vehicle traveling in excess of 300 mph, but without adding radiators or cooling fluid that would increase its weight, the Tuatara utilizes a network of funnels that sends air through the car. This simultaneously cools the engine and brakes while increasing downforce and decreasing drag.

Not only did these systems work in generating a new world record speed, but Webb was quoted as saying that if crosswinds weren’t working against the car, it could have gone even faster.

To qualify for the record, the Tuatara had to meet a number of criteria, including being identical to the vehicle a customer could purchase. Meaning, in theory, SSC could make you your own Tuatara if you’re looking to drop somewhere between $1.6 and $2 million. 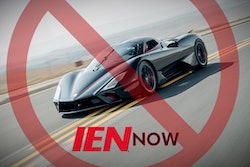